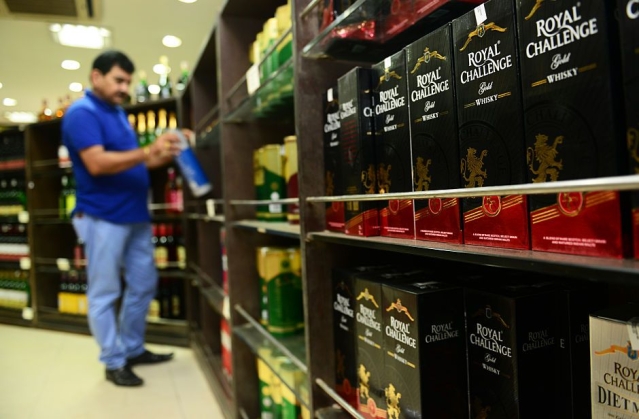 A liquor store (Photo by Ramesh Pathania/Mint via Getty Images)

Even as they hope to hit high consuming liquor, tipplers in Tamil Nadu on Wednesday (6 May) got a shock of price hike in Indian Made Foreign Liquor (IMFL).

A day before reopening the state owned liquor outlets in the state, barring Chennai, the Tamil Nadu government hiked the excise duty by 15 per cent on IMFL resulting in a price hike of Rs 10-20 for the tipplers.

The liquor retail in Tamil Nadu is a state monopoly run by the Tamil Nadu State Marketing Corporation or popularly known as Tasmac.

In a statement issued here, the government said it has increased the excise duty by 15 per cent on the IMFL.

As a result, the maximum retail price (MRP) of an ordinary variety of 180 ml bottle will go up by Rs 10 and that of the medium and premium varieties of IMFL increase by Rs 20 per 180 ml bottle.

There are over 5,300 Tasmac liquor outlets in the state contributing about Rs 30,000 crore of tax revenue to the state exchequer.

The revenue from the liquor bottle sales was bottled up during the lockdown period.

The Tamil Nadu government said in order to control the movement of people in the border areas with Karnataka and Andhra Pradesh as liquor shops have been opened there, the decision to open the liquor shops in the state was taken.

Major opposition parties in the state have strongly criticised the government's decision to open the liquor outlets at a time when the number of persons getting infected with coronavirus in the state are on the rise.

Earlier the Tamil Nadu government increased the value added tax (VAT) on petrol (Rs 3.25 per litre) and diesel (Rs 2.50/litre) with a hope to earn an additional Rs 2,500 crore.