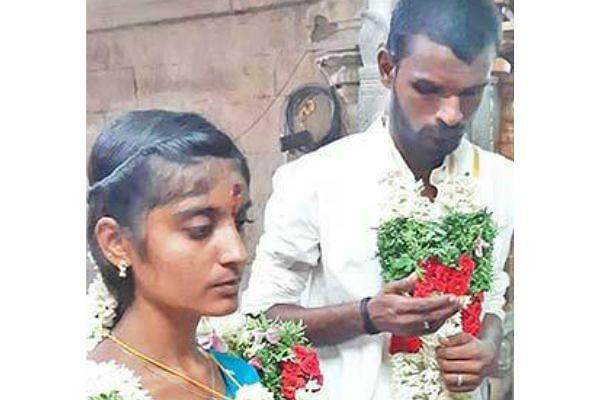 T. Solairaja and A. Petchiammal couple during their marriage. (Image Via One India Tamil)

In a case that is being reported as an honour killing, a newlywed couple were murdered by an armed gang in the wee hours of Thursday (5 July), even as they were sleeping in front of their house near Kulathur in Thoothukudi district of Tamil Nadu, reports The Hindu.

The girl's father has been picked up by the police in connection with the double murder as he was against the marriage.

According to the report, T Solairaja, 24, a saltpan worker, was in love with his co-worker A Petchiammal alias Jothi, 21. But there was stiff resistance to the affair from the girl's parents as the couple belonged to different groups of Scheduled Caste.

Despite all the resistance from girl’s family, Solairaja married Jothi in April at a temple, reportedly with his family’s support. After marriage, the couple started their life in a small house. Solairaj’s mother was staying at a relative’s house nearby.

A power cut on Wednesday (4 July) night drove the couple out of their house as they slept on a mat, in the precinct of their house. As the house had no compound wall around it, an armed gang entered the precinct and hacked Solairaja and Jothi to death.

When Solairaja’s mother came to the house in the morning, she saw her son and daughter-in-law, who was carrying a 60-day-old foetus, lying in a pool of blood with multiple cut injuries on their necks and faces. Hearing her screams, the neighbours came gathered around.

Demanding the arrest of the suspects, relatives of Solairaja and members of the Untouchability Eradication Front staged a dharna and moved away only after the police assured them of the early arrest of the murderers.

The couple lived in constant fear soon after the marriage and had submitted a petition to the Superintendent of Police after sensing suspicious movements around their house.

The police suspect that Jothi’s family, who vehemently opposed the marriage, might have orchestrated the double murder.