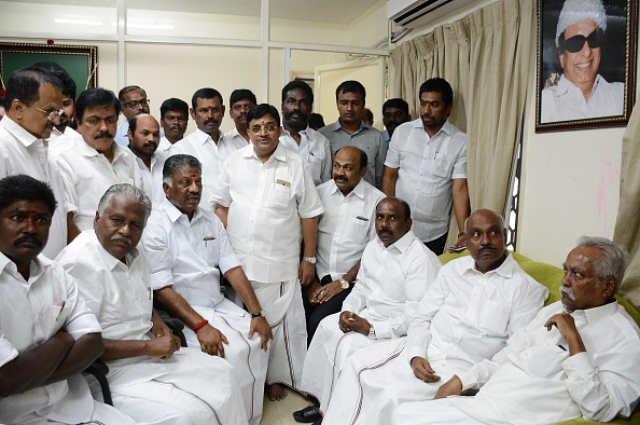 O Paneerselvam (seated third from left) is surrounded by supporters during a press conference at his home in Chennai. (STRINGER/AFP/GettyImages)

As Tamil Nadu waited with bated breath, All India Anna Dravida Munnetra Kazhagam’s (AIADMK) chief ministerial contenders had back to back meetings with the state’s governor Vidyasagar Rao in capital Chennai.

Interim Chief Minister O Panneerselvam, who was first to call on the governor at Raj Bhavan at 5pm today (9 February), said after the meeting, the “right thing will happen.”

“Justice will be delivered and truth will prevail,” said Panneerselvam, who thanked his supporters for standing with him in the time of crisis in the party.

The AIADMK has 134 legislators in the 235-member Tamil Nadu assembly. Sasikala needs the support of 118 MLAs to be chief minister. But in a major setback for the long-time Jayalalithaa aide, top AIADMK Leader E Madhusudanan joined the Panneerselvam camp.

OPS has explained that he resigned as Tamil Nadu Chief Minister under duress earlier this week. While Sasikala has the support of most of the ruling party's legislators, Panneerselvam claims many of them are privately in touch with him and will support him in the event of a trust vote.