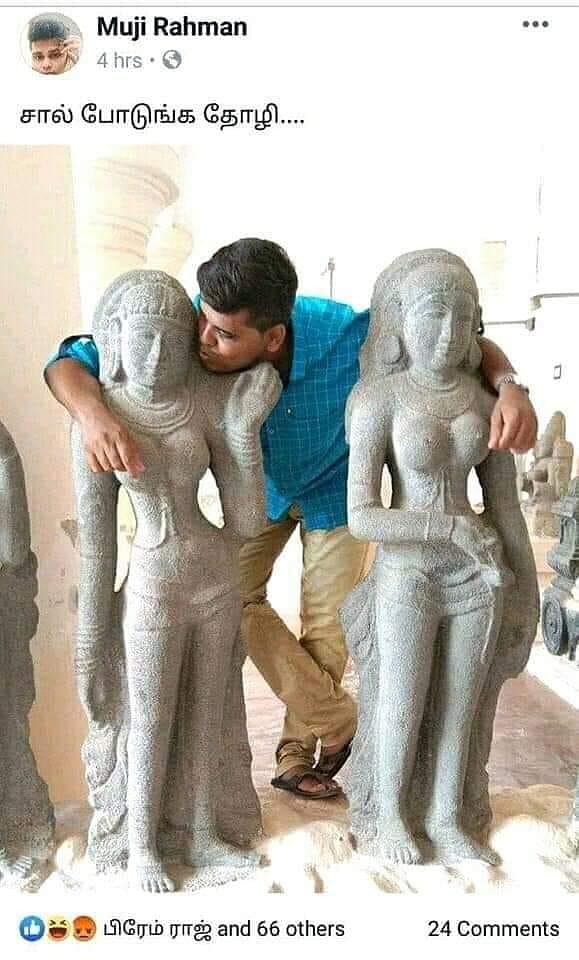 The police swung in to action after complaints poured in from enraged devotees, heritage enthusiasts and Hindu activist.

Trichy Police has arrested Muji Rahman & lodged him in Trichy Central Prison. Looks like he was hiding away from Madurai at his sisterâs place in Trichy. Absolutely shameless attack on Gods of other religion. pic.twitter.com/pvE2Yci4sk

Brihadishvara Temple is one of the largest South Indian temples. Built by Raja Raja Chola I between 1003 and 1010 AD, the temple is a part of the UNESCO World Heritage Site known as the "Great Living Chola Temples", along with two other Chola dynasty era Gangaikonda Cholapuram temple and Airavatesvara temple.

The obscene act of vandalism came to light when Rahman posted the vulgar pictures & selfies on his Facebook page were he is seen kissing, hugging & touching –inappropriately some female idols and sculptures at Thanjavur Temple’s museum adjoining the shrine.

Rahman posted the pictures accompanied by message wishing for Ramzan. Rahman also put in a comment suggesting that the sculptures should be covered in ‘shawls’.

According to Trichy police sources, Rahman, who originally hails from Othakkadai area of Madurai, was working as a food delivery boy in Trichy. As part of Eid celebration, he reportedly went to the nearby town of Thanjavur Wednesday and visited the Brahideeswara Temple took the controversial pictures with the women sculptures.

Hindustan Times reported that Rahman was booked under IPC section 295 for injuring or defiling place of worship with intent to insult the religion of any class and under the provision of 295 A- deliberate and malicious acts, intended to outrage religious feelings of any class by insulting its religion or religious beliefs. The police arrested him on Saturday based on a complaint filed by M Rathinavel, 23, of Kottapattu in Trichy.

Rahman is currently under judicial custody and lodged in Trichy Central Prison.