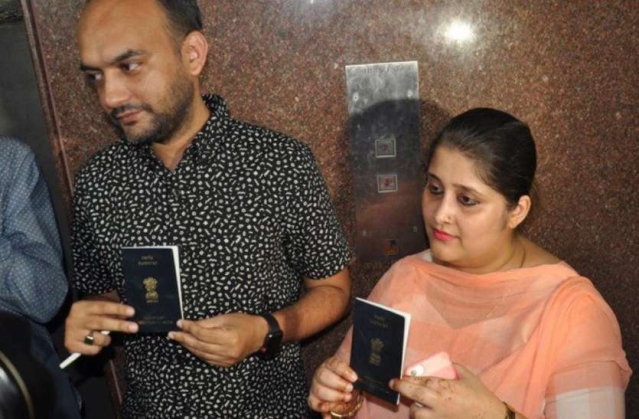 The recent Lucknow passport controversy seems like a one-of-its-kind case where a passport was issued to a person before police verification was carried out.

A quick background, the case involves a woman named Tanvi Seth who accused a passport official in Lucknow of forcing her Muslim husband to convert to Hinduism. The official, on the other hand, later clarified his stand saying that he never did such a thing and the reason why he kept her application on hold is that Tanvi’s name on her nikahnama (marriage certificate) was Sadia Anas while she wanted the passport in the name of Tanvi Seth. Vikas Mishra also questioned why Tanvi, who allegedly said she lived in Noida, did not approach the passport office in that city. Reports, on the other hand, state that she mentioned in her application that her current address is Lucknow’s Qaiserbagh.

After Tanvi’s sensational allegations sparked a massive outrage, the Lucknow office hurriedly issued a passport to her. The whole matter, however, has now come under the scanner.

As per a fresh report by Hindi daily Amar Ujala, it has emerged that when the police went to Tanvi’s in-laws’ house in Qaiserbagh, Lucknow, they did not find any proof that Tanvi had been residing there. As per rules, a person needs to be living at the mentioned place for at least a year, the report said. The police have not concluded their verification yet but told the newspaper that Tanvi’s location till 14 June is traced to Noida based on her call records.

Another report by Hindi daily Dainik Jagran elaborates on how the due process was ignored while issuing Tanvi a passport. The report says while she was handed the passport on the evening of 21 June, it was only on a day later on 22 June that the office got the documents of her details. The report says that the officials simply made Tanvi write on a paper that she was working for a Noida company under a work-from-home arrangement.

The report also said the office’s head V P Singh is on leave and is not clued in on the matter.

Reports are speculating that Tanvi’s passport may be rejected if details provided by her are found to be incorrect. Meanwhile, passport officer Vikas Mishra has an inquiry set up against him based on Tanvi’s allegations and he continues to remain posted in Gorakhpur where he was immediately transferred after the controversy.