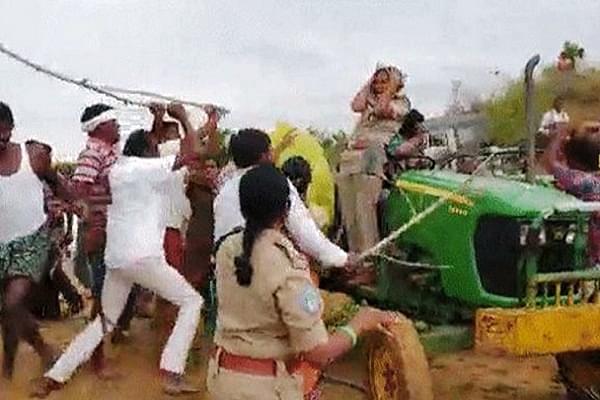 After a video went viral last month (June 2019) showing a woman forest official, Anitha, being physically assaulted by a mob armed with sticks in the village of Sarsala in Telangana’s Asifa district, the same officer has now had a police case registered against her by a villager under the SC/ST (Prevention of Atrocities) Act, reports The News Minute.

Sarsala resident Nayini Saroja has alleged that Anitha and other personnel from the forest department hurled abuses at them while mentioning their caste. Apart from Anitha, 15 other individuals have also been named in the FIR.

The video of the incident in which members of the mob, which was allegedly led by a Telangana Rashtra Samiti (TRS) leader, attacked forest department officials can be viewed below:

A Forest Range Officer in Telangana was ruthlessly attacked by a mob as officials were attempting to take up an afforestation programme in Kaghaznagar. Officials said that the mob was led by Koneru Krishna, brother of TRS MLA Koneru Konappa @thenewsminute pic.twitter.com/SIcFCwdQsm

The incident took place while the Forest Department was embarking on an afforestation drive, part of the Kaleshwaram Irrigation Project in the Kagaznagar area.

In the video around 30-40 goons, armed with sticks, can be seen attacking the vehicles, and the directly assaulting Anitha, was trying her best to pacify them.