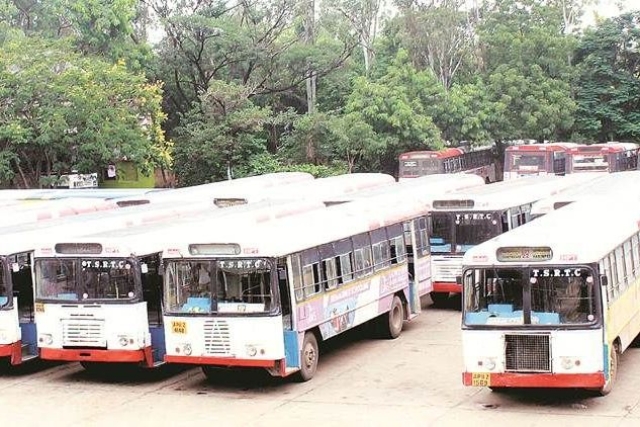 TSRTC buses lined up at the depot during the strike.

After nearly two months, normalcy is set to return to the Telangana State Road Transport Corporation (TSRTC) as the state government on Thursday (28 November) decided to take back all striking employees but announced hike in bus charges to mobilise an additional Rs 750 crore annually.

Chief Minister K. Chandrashekhar Rao told reporters after the state cabinet meeting on Thursday night that the government has decided to increase the bus tariff by 20 paise per km to generate additional income to cut down the losses of state-owned transport body. The new tariff will come into effect from Monday (2 November).

He also announced that the government will immediately release Rs 100 crore to the TSRTC as it wants to save the Corporation and strengthen it.

The decision came three days after the employees decided to call off the strike. The TSRTC management had refused to take them back till the Labour Commissioner takes a decision on legality of the strike as directed by the Telangana High Court.

KCR, as Rao is popularly known, said the government still had time to approach the Labour Court but it decided to give employees a chance. He urged all the employees to join duty unconditionally from Friday. He assured them that no action will be taken against them but advised them to dump the union leaders who misled them.

Calling for doing away with the unions in TSRTC, he said a welfare committee should be set up in every depot with two representatives from the employees.

Stating that his government is not interested in snatching livelihood of anybody, the Chief Minister said the government would build the TSRTC into a strong and profitable organisation.

Nearly 50,000 employees of TSRTC were on strike since 5 October to press for various demands including the demand to merge the TSRTC with the government. About 1,500 employees had later joined the duties on the appeal by the Chief Minister.

Terming the strike illegal, the government rejected all the demands of the employees. KCR had even announced that the employees dismissed themselves by not joining the duties despite the orders.

Non-payment of salaries for two months and the tough stand taken by the government had pushed many employees into distress. Few employees committed suicide or died of cardiac arrest.

KCR announced that the government will provide jobs to one member each in the families of the deceased.

He slammed the opposition parties for using the striking employees for their political ends. He said that the Centre can't intervene in the RTC issue. He said the state would ask the Centre to provide Rs 22,000 crore to the TSRTC in line with its 31 per cent share in the Corporation.