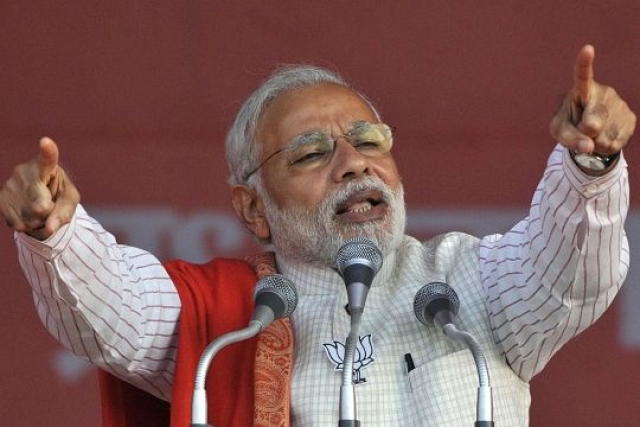 PM Modi at a rally in New Delhi. (Photo by Vipin Kumar/Hindustan Times via Getty Images)

Over the next five days beginning from 8 February, Prime Minister Narendra Modi will be travelling to 10 different states, also spending a night in Assam, reports The Economic Times. He will be inaugurating a number of important infrastructure projects and will also conduct rallies as part of this schedule.

The prime minister’s journey will begin with an 8 February rally in Raigarh’s Kondatarai in Chhattisgarh. He will then address a rally in Jalpaiguri in West Bengal. Next Modi will travel to Assam spend a night there; he will an unveil several major projects in Guwahati, among them a bridge over the Brahmaputra, an AIIMS as well as a new gas pipeline which will link the North-Eastern states with the national gas grid.

From there the prime minister will land in Arunachal Pradesh and participate in the inaugural ceremony of a new greenfield airport in the state. After that, he will attend a rally in Tripura before turning back to Delhi.

The day after that, Modi will reach in the Tirupur district of Tamil Nadu and address a rally there, then move on to Hubballi in Karnataka for another rally; within the same day, he will also make a move to attend a rally in Guntur, Andhra Pradesh.

The prime minister will land in Mathura, Uttar Pradesh on 11 February to attend a programme organised by Akshay Patra Foundation, which provides mid-day meals to around 18 lakh pupils in the country. The event will also see the participation of Uttar Pradesh CM Yogi Adityanath and Union HRD Minister Prakash Javadekar; the prime minister will likely personally serve children mid-day meals on the occasion.

Finally, 12 February will see the prime minister travel to Kurukshetra, Haryana to attend a function which will see the participation of women sarpanches from all over the country.