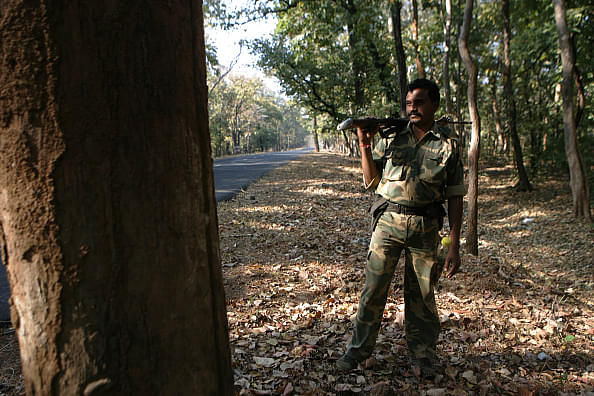 Polling began in 10 out of 18 assembly constituencies at 7 am in the first phase of Chattisgarh elections on Monday (12 November) under the surveillance of 1.25 lakh police and paramilitary personnel, reported the Economic Times.

However, an improvised explosive device (IED) was detonated by Naxals in Dantewada district. “Naxals who had called for a boycott of the polls, detonated the IED in the morning,” said police.

The explosion took place around 5.30 am on Tumakpal-Nayanar road when a team of security men was escorting polling personnel to their booth," said a senior police officer.

No harm was caused to the security and polling personnel in the explosion. The polling party safely reached the Nayanar polling booth in Katekalyan area, he added.

Polling in 10 constituencies - Mohla-Manpur, Antagarh, Bhanupratappur, Kanker, Keshkal, Kondagaon, Narayanpur, Dantewada, Bijapur and Konta - started at 7 am and would conclude at 3 pm, said a poll official.

In the other eight constituencies - Khairgarh, Dongargarh, Rajnandgaon, Dongargaon, Khujji, Bastar, Jagdalpur and Chitrakot - voting began at 8 am and would end at 5 pm, he added.

On Sunday (11 November), a 27-year old sub-inspector of Border Security Force (BSF) was killed as six IED blasts were triggered off allegedly by Maoists in Kanker district of Chhattisgarh. Police have reported that the blasts were triggered to target the security forces posted between Kattakal and Gome villages.

Kanker SP KL Dhruve said the sub-inspector, Mahendra Singh, was rushed to a hospital after he sustained splinter and bullet injuries. The SP added, “We have launched a combing operation in the area after the blast,” reported Hindustan Times.

The blast happened around 8.30 am when a team of BSF men was on routine area inspection in Koliyabeda area. The area comes under Antahgarh assembly constituency from where MP Vikram Usendi is standing in the elections for the BJP.

In another incident, one Maoist was gunned down in an anti-naxal operation by the Special Task Force (STF) in Chhattisgarh’s insurgency-hit Bijapur district.

Security has been increased to almost one lakh personnel and made more stringent in seven districts of Bastar division and Rajnandgaon district for the first phase of the polls on 12 November.