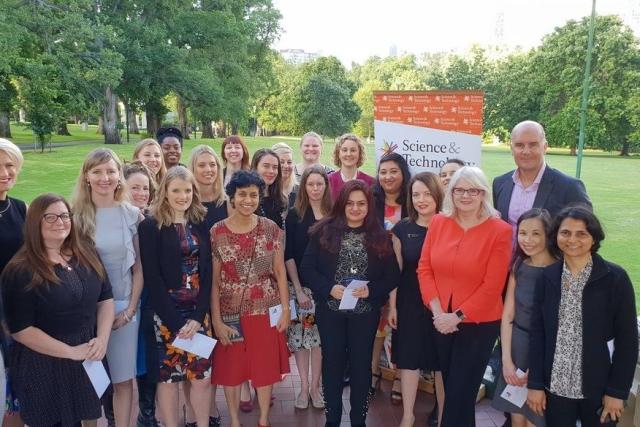 Women selected as ‘Superstars of STEM’ in 2018 (Source: @karenandrewsmp/Twitter)

Three women scientists of Indian- origin— Onisha Patel, Devika Kamath and Asha Rao, have made it in the list of 60 Superstars of Science, Technology, Engineering and Mathematics (STEM), announced recently by the Australian government, reports The Indian Express.

The Australian government is reportedly planning to train them for over a year to become influencers for female students to address the gender gap in STEM.

"The Australian Department of Science and Technology aims to make sure that deserving female scientists get proper visibility so that they can be a role model for girls who wish to take up STEM.” Dion Pretorius, Communications and Policy Manager at Science & Technology Australia was quoted saying by IE.

Devika Kamath enquires about the origin of the cosmos matter with which stars are made of. About India, she said, “When it comes to research, many Indian students face a lack of guidance. After this fellowship, I want to set-up a guidance initiative wherein I can help Indian students achieve what they want to in academics,”

Similarly, Onisha Patel says she loved science and arts but did not know what structural biology was until she took admission in RMIT University, Australia.

She moved to Australia in 1998 in search of better opportunities in science and her research now has the potential to generate a cure for different kinds of cancers including breast cancer. She is investigating how proteins worked inside human bodies and based on the information will design novel therapeutics for cancer.

Asha Rao is a cyber mathematics expert and specialises in detection of money laundering. She teaches mathematical science at the RMIT University. She has participated in the fourth United Nations Intergovernmental meeting on cybercrime held recently.

Rao also teaches at the universities, and her classes have more boys than girls. “Gender gap in STEM courses is as much a reality in Australia as in India. Some lesser women pursue STEM in higher education and even fewer women in senior-level jobs," said Rao.