‘Till He Goes To Cemetery’: Rajinikanth Latest Target Of Christian Priest Who Asked Followers To Punch Hindus In Face 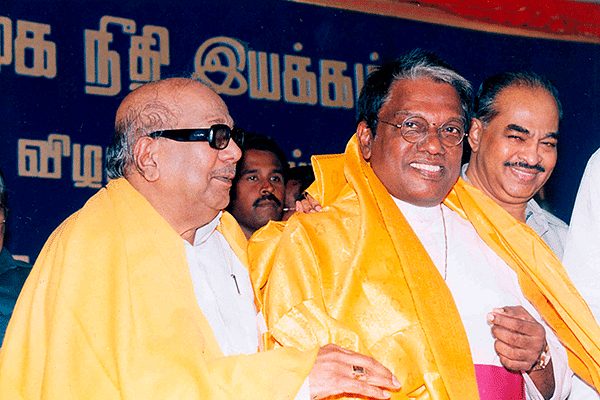 Bishop Ezra Sargunam,a controversial evangelist from the state of Tamil Nadu, in a recent interview said that Rajnikanth will keep on speaking about his political entry, till he goes to cemetery.

He (Rajinikanth) will keep on speaking about his "Political Entry" till he goes to Coffin!

What a human is he to utter such words, that too being a PRIEST advocating Jesus who spread peace and love! pic.twitter.com/T1EtIvAM79

Sargunam, reportedly has close ties with the DMK and has on several occasions supported them, especially during the elections.

Earlier in June this year, a video clip went viral on social media in which he could be seen addressing a group of people and encouraging them to beat up anyone who claims that Hinduism is a religion.

"There is nothing called as a Hindu Religion, Punch them in their face couple of times, make them bleed and help them understand the truth" - Bishop Ezra Sargunam, now you know why M.K.Stalin wants to uproot Sanatana Dharma. pic.twitter.com/L8lwwZMVop

In the video clip, he denies the existence of the Hindu religion. He uses British Raj’s census exercise as the example.

“The census takers were confused as to who they can classify as a Hindu. A committee defined the identity ‘Hindu’ as someone who wasn’t a Muslim, Christian, Sikh or Buddhist,” he said.

Then, the Bishop urged his fellow Christians to take up the challenge and spread the word that there is no such thing as Hindu religion.

If anyone opposes, the Bishop without hesitation asked his followers, to punch them in the face and make sure they bleed. He added that they could just ask for forgiveness from God after punching them and then they would be forgiven.