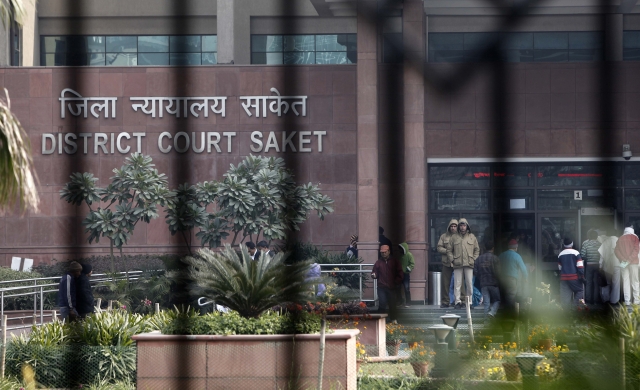 The Saket court, on Wednesday (6 November), witnessed some drama as the agitating lawyers announced complete lockdown of lower courts to press for their demand for action against the policemen involved in the Tis Hazari court clashes on 2 November.

Litigants could not enter the court premises as the gates were locked by lawyers.

In the morning there were instances of verbal duel between advocates and litigants, but post-noon, litigants realised that arguing with lawyers would not help and soon the court premise and the road outside got deserted.

It was the third consecutive day on Wednesday when the Saket court remained shut, leaving litigants roaming from gate to gate to enter the premises.

All through the day, advocates kept a distance from the media standing outside the court's gate number 3.

Soon after the high court delivered its verdict, saying its 3 November order directing no coercive steps against the lawyers against whom FIRs were registered in the aftermath of Tis Hazari court violence on 2 November is "self-explanatory and needs no clarification", the lawyers celebrated for a while only to return to the silence mode.

Since the decision was seen as a setback for the Delhi Police, the media present outside the court was hoping for comments from the protesting lawyers, but to the contrary almost an hour later advocates along with a court staff reached the gate number 3 and put extra locks on the gate, which was already closed with a lock and barricades after it.

"No comments, sorry no quotes," lawyers told the media on being asked about the future course of action, as they helped female court staff to climb the barricades.

During the hearing, the high court bench heard another application filed by the Delhi Police seeking expunction of certain observations made by the court in its para 15 of the 3 November order.

These observations pertained to the conduct of the Delhi Police ASIs and top officials Harender Singh and Sanjay Singh on the day of the incident.

After hearing, the Bench clarified, "The observations by the court on 3 November will not have any bearing on the ongoing judicial inquiry. Both the applications by the MHA and the Delhi Police stand disposed".

The Bar Council of India (BCI) has announced that it will withdraw the strike and resume work from Thursday. It also demanded action against cops involved in the scuffle at the Tis Hazari court, while promising action against lawyers found guilty.

"We held a meeting on Tuesday and issued notices to advocates. We will take action against the guilty lawyers. But the manner in which thousands of cops gathered outside the police headquarters was illegal and unconstitutional," BCI Chairperson Manan Kumar Mishra said.

A minor argument between a lawyer and some policemen over parking at the Tis Hazari court complex led to violence and arson and a lawyer also received a bullet injury.