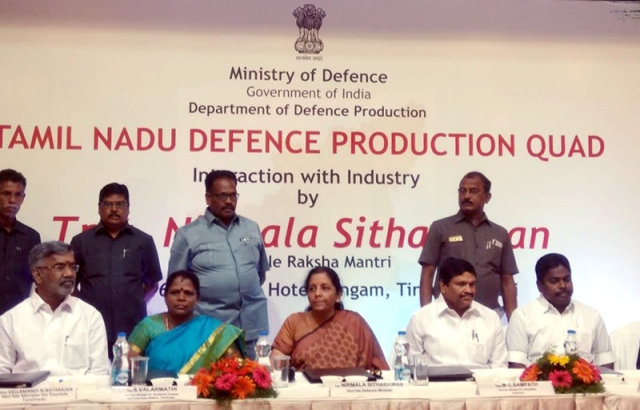 The Union Minister for Defence, Smt. Nirmala Sitharaman interacting with the local defence and allied industrialists, MSMEs and other stakeholdersC

This will be the country's second defence industrial corridor after the first one was launched in Aligarh, Uttar Pradesh, in August last year. Both the corridors were announced in the last Union Budget in 2018 as part of the measures to build an indigenous defence production ecosystem.

Tamil Nadu defence corridor will be developed over the existing defence ecosystem in the state, and by building synergy with state’s robust manufacturing capabilities in automobiles and components, strong information technology base, well-developed textile production capabilities, besides leveraging its large pool of engineering talent.

The Tamil Nadu corridor is envisaged to have six nodes at Trichy, Salem, Hosur, Coimbatore, Madurai as well as Chennai. It is expected to be a specialised facility in precision-centred, aero component manufacturing.

Three defence related MoUs will also be signed in the presence of the Union Defence Minister. The Minister will later inaugurate the Coimbatore Defence Innovation hub, by video conferencing from Trichy.

Coimbatore has been chosen as the defence innovation hub as it already has a thriving ecosystem of large number of micro, medium and small enterprises. The innovation hub will have a common facility centre to be created through a special purpose vehicle.

CODISSIA (Coimbatore District Small Industries Association) has identified items for indigenisation by their industries. The government will bolster their design capabilities, through the creation of the defence innovation hub. The government will fund up to of Rs 20 crore to the facility which will be setup by CODISSIA. The body will work on indigenising items for the defence PSUs.

In Coimbatore, as many as 200 enterprises are vying for lucrative defence contracts from large manufacturers, and some have already lined up few deals. Among the early starters are CRI Pumps (supplies to the Indian Navy) and Shanthi Gears, a part of the Rs 32,900 crore Murugappa Group, which makes gearboxes for battle tanks.

Trichy has around 2,500 micro, small and medium enterprises (MSMEs) with majority of them serving as ancillary units of Bharat Heavy Electricals Ltd (Bhel). Trichy is also known for fabrication and machining; some SME units there specialise in laser cutting of Tungsten, a metal widely used in making ships and submarines.

Experts estimate global defence manufacturers can reduce their cost by 20-40 per cent by sourcing locally from India .

Leading consulting firm Ernst and Young (EY) has been entrusted with the task of preparing the detailed project report (DPR) for the Tamil Nadu Defence Corridor.