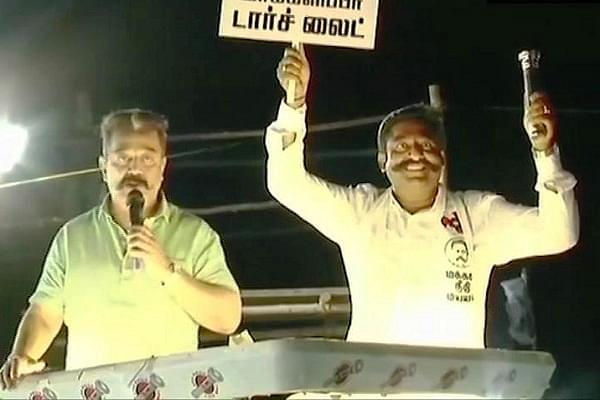 Kamal Haasan at the rally in Aravakurichi (@ANI/Twitter)

Campaigning in a Muslim dominated area on Sunday (13 May), Kamal Haasan said that India’s first terrorist was a Hindu whose name was Nathuram Godse.

Makkal Needhi Maiyam (MNM) founder and actor turned politician Kamal Haasan waded in to yet another controversy by saying “free India’s first terrorist was a Hindu,” referring to Nathuram Godse who assassinated Mahatma Gandhi in 1948.

Haasan made the remark while campaigning for his party candidate S Mohanraj in a Muslim dominated area of the Aravakurichi assembly constituency in Tamil Nadu.

By-polls are scheduled to take place in Aravakurichi along with three other assembly segments-Thiruparankundram, Ottapidaram and Sulur on 19 May.

The by-poll in Aravakurichi were necessitated following the disqualification of sitting MLA and former transport minister Senthil Balaji. Balaji, was a key member of the TTV Dhinakaran faction and joined AMMK.

However, he had fallout with the AMMK chief and switched over to the DMK. Presently in-charge of DMK’s Karur district, Balaji is now the party candidate from the constituency. V V Senthilnathan is the AIADMK nominee and P H Shahul Hameed is the AMMK candidate.

Kamal Hassan, buoyed by reports that his party managed to attract decent traction in many constituencies during the recently concluded Lok Sabha polls, has also intensified his electioneering efforts in the constituency.

“I am not saying this because many Muslims are here. I’m saying this in front of Mahatma Gandhi’s statue. First terrorist in independent India is a Hindu – his name is Nathuram Godse,” Haasan said.

Haasan added that he is “seeking answers for that murder”, referring to Gandhi’s assassination in 1948.

“Good Indians desire equality and want the three colours in the tricolour to remain intact. I am a good Indian, will proudly proclaim that,” he added.

Muslim vote bank holds the key to the outcome in Aravakurichi. According to political observers, Pallapatti, a town panchayat with 98 per cent Muslim population, will determine the eventual winner.

While the Muslim community is known to overwhelmingly favour DMK, an element of uncertainty on community's voting preference exists as AMMK has fielded Shahul Hameed, a former ADMK functionary who is well known in Pallapatti.

BJP state president Tamilisai Soundararajan was quick to criticise the actor-turned-politician for his remarks and said it was an obvious attempt to appease minorities.

“But dares to take up decades old event which was well enquired & guilty punished? He threatened to leave India when his film screening was prevented by religious groups, but now he calls himself true Indian. True political acting started now having lost the chances in screenplay,” added Soundararajan, referring to the 2013 controversy surrounding a ban on Haasan’s film Vishwaroopam.

Both Mainstream and Islamic organisations had demanded a ban on the movie expressing concern over the depiction of the community in the film. Haasan had organised a special screening of the film for Islamic groups in an attempt to buy peace with them.