St Joseph’s Hospice To Be Shut down With Immediate Effect, All Inmates Shifted 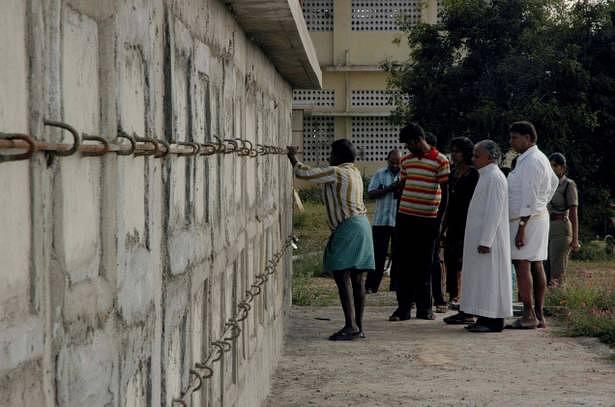 The vaults used to store the bodies. (image via Twitter)

The Newsminute(TNM) reports that  St Joseph’s Hospice in Tamil Nadu will be shut down with immediate effect. The inmates citizens will be shifted to other homes. The order has been issued  by the Revenue Divisional Officer(RDO). St Joseph’s hospice in Palaswaram in Kanchipuram district has been on an eye of a storm hit by serious allegations of organ trade, ill-treatment of senior citizens and whether the home has obtained permission to bury people in vaults.

The TNM quoted  RDO, Noor Mohammad has saying that "The primary reason for the shutting down is that the hospice does not have a licence. It has been operating its cemetery too without a license.”

The website also reported that RDO as saying that “We are shifting all of them today to another home. No matter how long it takes, they will be taken to another government home tonight. We will enquire about their addresses and move them to the a place of their choice.”

The investigation into the St Joseph’s hospice in Palaswaram in Kanchipuram district, continues with officials carrying out a complete probe into the several allegations of organ trade, ill-treatment of senior citizens and whether the home has obtained permission to bury people in vaults. Once the probe winds up, the officials are expected to take action based on their findings.

Recently, a team of 60 officials from Tamilnadu government, who inspected the orphanage, said around 60 people have died at the institution in January alone.

Locals here allege that they have always been suspicious of the place and have seen elderly people running away from the premises and sometime hear screams from the campus.

We are forcibly brought and confined here against our will, please free us, urge #StJoseph hospice inmates! What kind of motive/hatred do you @sumanthraman think they have against the home Sir? Not whatsapp forward saar, @PTTVOnlineNews report. pic.twitter.com/8uNBgCOA3R

The allegations got stronger recently, when a truck with vegetables, a dead body wrapped in a sari and two senior citizens – a man and a woman – were found after a two-wheeler motorist stopped the vehicle and picked up a quarrel with the driver to know what was going on.

The woman in the truck had waved out and was screaming for help to the motorist which made him stop and inform the police. A large crowd had gathered at the spot by the time deputy superintendent of police (DSP) Madhivanan and sub-inspector Kannan reached the spot.

A case of suspicious death has been registered by the local police regarding the dead body in the ambulance, and investigations are under way.

The management also fielded questions raised against them.

Officials of the home claimed the women screaming in the truck was mentally unsound and regarding the construction of vaults for burial, the management said they had the permission to do so and it was a common practice in Rome and Kerala.

Regarding the expiry of the licence, they claimed that they had applied for renewal in September, but the delay was on the part of the government, reports say.

The hospice is suspected of selling organs of dead people to other countries and it came to light that the administration does not have proper records of the deceased.

Following this, many relatives of inmates have begun coming in to remove them from the home. Many of the inmates claim they have been kept here against their wishes.

Speaking to the media, a woman inmate said, “I was brought here straight from a hospital visit. My family does not know I am here. If they leave me at Tambaram, I can find my way to my family. There are a lot of people like me here who are struggling. Despite telling them that we want to leave, we are not allowed to. Many have broken arms and legs, we live in poor conditions here with bad food. I have told them many times that I want to see my son, but they say we have no one outside to go live with.”

Residents also alleged that the orphanage has been notorious in the way it has been functioning over the years.

A resident said, “We also had been suspicious of this place for a long time. We do no know how many senior citizens have died here and how many were victims of organ trafficking. It has to be found out how the elderly were brought and kept here against their wish.”

“Only people from outside, non-native to the place, are being admitted to the orphanage and local people are not employed on the premises. There were earlier reports of ill-treatment of inmates,” he pointed out.

(Republished From News Today With Permission.)