To Prevent Mis-Representation Of India In Shows, RSS Holding Meetings With Netflix, Amazon And Other Content Providers 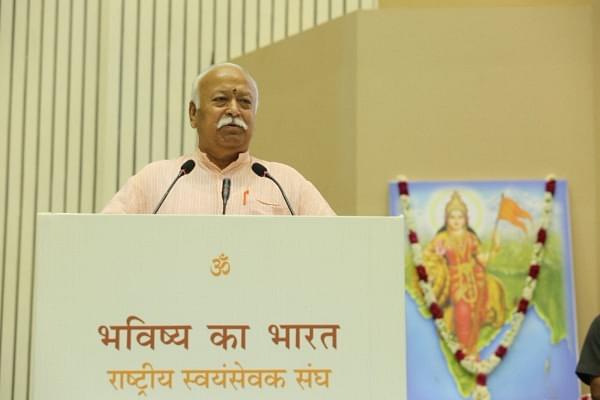 RSS sarsangchalak Mohan Bhagwat addressing a gathering on the “Bharat of the Future” at an RSS event. (Representative Image) (RSS/Twitter)

In order to restrict ‘anti-national’ and ‘anti-Hindu’ content in movies and shows, the Rashtriya Swayamsewak Sangh (RSS) has been having meetings with the officials of online streaming platforms such as Netflix, Amazon, and others, The Economic Times reports.

According to a source, RSS representatives have had over six covert meeting in the last four months in Mumbai and New Delhi. The Sangh has urged the content providers to rather run content that “represents real Indian culture and ethos.”

The RSS, as per the source, specially aims at preventing content which is portraying the Indian standpoint on Kashmir in a negative way or defaming Indian Army and Hindu symbols.

In the wake of the protests against the Netflix series ‘Leila’, a meeting had taken place in New Delhi with the company’s officials, an RSS office-bearer told ET. “We reminded them about the Twitter case when the issue of blocking right-wing handles was raised by Anurag Thakur in a parliamentary committee and officials summoned. We just want them to be mindful of Indian sensibilities when they commission or select content and not go by merely what sells. We also suggested to involve more Indians when they scout for content for India,” the RSS insider said.

According to the ET report, Netflix officials had refused to speak on the matter.

Coincidentally, the central government had also recently stepped in to deal with the issue seeking suggestions from the stakeholders. Union Minister of Information and Broadcasting Prakash Javadekar said that the Film Certification Appellate Tribunal had scheduled a meeting with the stakeholders on Friday to discuss regulation and certification of content on online curated content providers (OCCPs).

According to ministry officials, it wants to address the issue without infringing upon the freedom of video on demand (VoDs). It is also considering a dedicated body with a helpline to address complaints, preventing every issue from going to court.

Speaking on the matter, Panchajanya editor Hitesh Shankar said, “when the narrative of Kashmir is being set right after many years, we cannot let misconceptions and defence of terror spread to homes through handsets. It is the moral duty of the government to address this.”