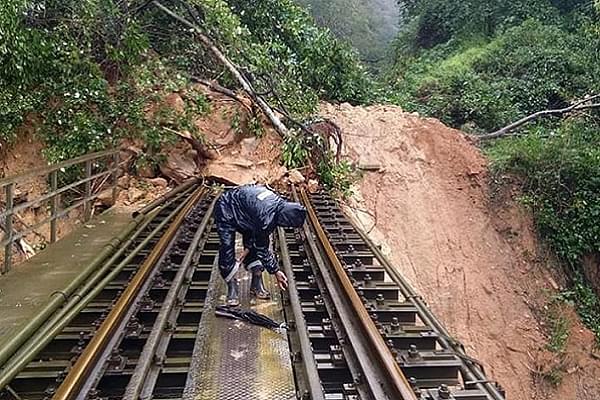 Indian Railways has been engaged in the renovation of the 55.26-km-long railway line along the Sakleshpura-Subramanya road stretch. Services had been temporarily suspended following the landslide in the Hassan-Mangaluru railway section in mid-August.

Since the first landslide on 14 August, there have been at least 64 more that occurred alongside with torrential rains and heavy winds, reports The New Indian Express. The problems that follow landslides have been generally anything from destruction of railway sleepers, trees being uprooted, signal cables being destroyed etc.

As many as 16 railway personnel were stranded for four days until they were rescued on 17 August. Divisional Railway Manager for Mysuru, Aparna Garg, was quoted as saying, “They were in a nightmarish situation surrounded by landslides and boulders and could not leave the place. The landslide was happening right in front of them and they feared it would slide on to their building but could not step out.”

Nearly 80 per cent of the debris has been cleared now. Post-the assessment of soil, preventive measures have been adopted where necessary. Nets made of steel wires have been installed on rocks. This method of erecting vertical iron nails to prevent rocks from falling apart is called as ‘Canadian fencing’.

The earlier target of resuming operations by 20 September couldn’t be achieved despite best efforts. The line will be operational by the end of October.