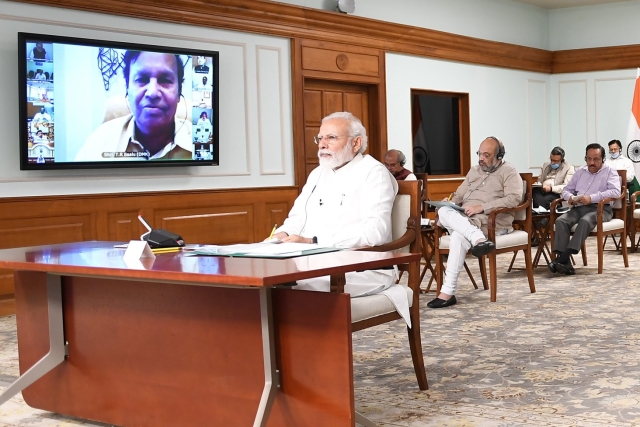 Even the Prime Minister’s Office took strong exception to the leak and termed it avoidable.

The Trinamool Congress came in for a lot of trenchant criticism from netizens over allegations that it leaked a 2.20 minute video clip (watch this) of Prime Minister Narendra Modi’s interaction with MPs Wednesday.

A senior editor with the Times Now news channel posted the short video that she had accessed on her Twitter timeline Wednesday afternoon.

She alleged that the video, in which Trinamool Lok Sabha MP Sudip Bandopadhyay is seen participating in the video conference with the Prime Minister, was ‘released’ by the Trinamool Congress.

In the first 55 seconds of the 2.2 minute video clip, Bandopadhyay is seen fiddling around with his smartphone.

It is clear that Bandopadhyay, or someone in his party who was present in the room along with him, recorded the conference call.

There are two TV screens placed beside each other with one featuring the Prime Minister and the other featuring the participant at the other end (Bandopadhyay in this case).

That the videoconference was recorded by the Trinamool is also apparent from Bandopadhyay’s comment to the person sitting beside him. After 1.39 minutes, Bandopadhyay tells the person in Bengali that the lockdown won’t be lifted (lockdown othabe na).

The Prime Minister’s Office took strong exception to the leak and termed it avoidable.

Netizens were far more unsparing in their criticism of this alleged leak.

Many termed the leak “shameful” and a “breach of protocol”. Some said that the leak was the reason why the Trinamool cannot be “entrusted with matters of national security”.

Tellingly, despite being tagged by the Times Now journalist, the Trinamool had no comments to offer on the allegation till Thursday afternoon. Other media houses, including the Republic, also repeated the allegation about Trinamool leaking the video.

Bandopadhyay, a four-term MLA who is presently in his third term in the Lok Sabha, had been arrested by the CBI in January 2017 for his alleged involvement in the Rose Valley scam and spent over four months behind bars.

He reportedly participated in the video conference with the Prime Minister from the Trinamool party headquarters.