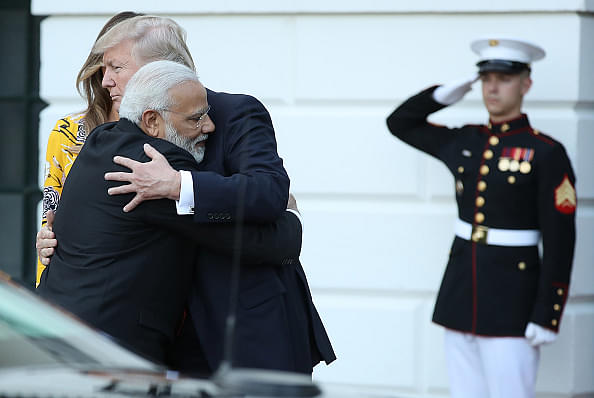 Modi embraces Trump during an official visit to Washington, D.C.

Detailing steps taken by the Trump administration to strengthen Indo-US ties over the last two years, Principal Deputy Assistant Secretary of State for South and Central Asia, Alice Wells, revealed that the US President refers to India as a ‘true friend’, reports Deccan Herald.

She was speaking at a farewell reception organised at the well-known Blair House to honour the departing Indian Ambassador to the US, Navtej Singh Sarna. Blair House is the official guest house of the US President.

"President Trump calls India a true friend and Secretary (of State Mike) Pompeo has characterised the US-India bilateral relationship as one deeply bound by our shared values," she stated.

She noted how Prime Minister Narendra Modi had been during a successful summit organised between the two countries in Washington.

Wells praised Sarna, who will be retiring after a 38-year career in the Indian Foreign Service, for helping to facilitate the development of ties between the two countries.

"Under your leadership, our countries have negotiated and finalised a landmark communications compatibility and security agreement, which makes our military cooperation more profound and advanced. We have also taken significant steps to build on India’s status as a US major defence partner, including elevating India to strategic trade authorisation, tier one status,” she said.

India and the US launched a new ‘2+2 Dialogue’ during Sarna’s term, which propels security and strategic cooperation between the two countries, not only for their respective citizens, but also to the advantage of the wider Indo-Pacific region.

Sarna recalled how Modi’s visit was the zenith of his tenure in Washington DC, stating that Trump and Modi shared great personal chemistry, and the latter’s visit had resulted in potent outcomes.