Trump Takes On Biden And The Democrats, Accuses Them Of Being ‘Mass Delusionists’ 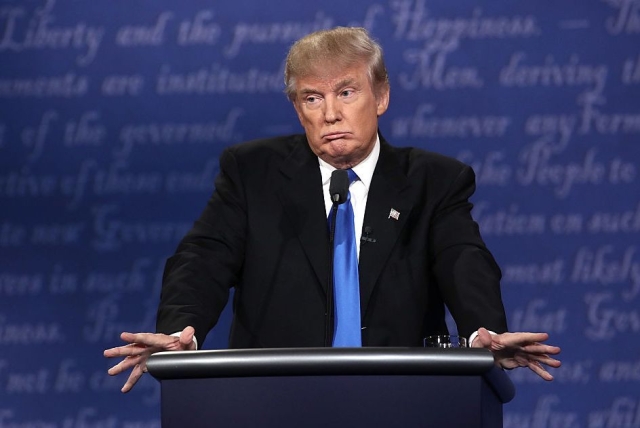 The bounce is back in a vintage Donald Trump, charismatic and calculating replete with theatrics, pausing for effect as he had 19,000 people completely in his thrall at Minneapoliss Target Centre in his first 2020 campaign speech since the launch of the impeachment inquiry described as a "partisan witch hunt" by the president.

Revelations that the "whistleblower" or "anonymous informant" as Reps call him flew with Dem presidential candidate Joe Biden twice to Ukraine has created flutter in the dovecotes. Conspiracy theorists got a leg up. Calling the Dems "a dirty political establishment", "sinister fakers and partisan witch hunters", he accused them of being "mass delusionists".

At one point, Trump brought the assembled crowd to its feet by saying that Joe Biden's only useful trait as vice president was his preternatural ability to "kiss Barack Obama's a--".

Fox News reported that Trump cited a new report in The Washington Examiner that the whistleblower at the center of Democrats' impeachment push had worked with Biden.

The whistleblower's anti-Trump attorney, Mark Zaid, acknowledged earlier in the week that his client had "contact" with current presidential contenders "from both parties."

The president also derided the Biden campaign for aggressively seeking to convince Facebook and The New York Times, as well as all major television networks, not to cover what it called "conspiracy theories" about potential Biden corruption.

Nailing the wretched Washington swamp, Trump's hot rhetoric over the Bidens bordered on a scathing indictment.

He asked how Hunter Biden, who knows nothing about anything got $1.5 billion for energy consultancy. He attacked the Bidens with relish, "The Bidens got rich -- and that is substantiated -- while America got robbed," Trump said.

"Sleepy Joe and his friends sold out America. ... And in a brand new report, just came out as I'm walking on the stage, it turns out that when Joe Biden was vice president -- he worked with the so-called whistleblower. This is nothing more than a partisan witch hunt, sabotage, and I'm sure they're going to say, 'totally unsubstantiated.'"

Trump laid out a classic smorgasbord dealing with individual issues but the big picture was that Republicans represented the American people, American family and of course the American dream.

He lashed out scathingly about how Dems are stoking corruption and socialism in the power corridors of Washington DC. Patriotism and nationalism had strong underpinnings in his speech as he argued vehemently to "take back our country".

He averred that it was time to end the endless wars giving examples of how US troops were in Syria for a decade while they have been in Afghanistan for 19 years. It was time to bring them home, he said.

In an emotional pitch, he added that it was hardest to sign letters to the families of the departed soldiers. Trump claimed that US has done its job, having defeated whoever they had to -- I do not want to stay in Syria.

Master of changing goal posts, Trump wanted Nancy Pelosi to help pass legislation rather than talk nonsense. The president is back as he returns to the hurly burly of campaign politics.