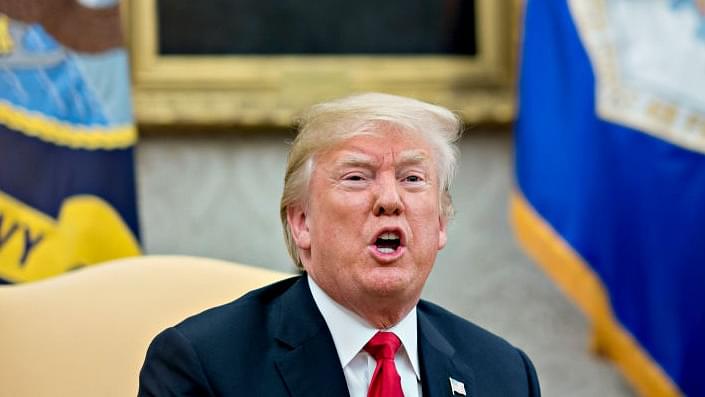 United States (US) President Donald Trump has threatened North Korean leader Kim Jong-un of dire consequences if he fails to agree to the complete denuclearisation of his country, The Guardian has reported.

On being asked if the ‘Libyan model’ can be a template for dealing with North Korea, Trump replied in the affirmative. However, if soon became clear that he was unaware what the model was as he went on to threaten Kim Jong-un with total decimation.

The ‘Libyan model’ instead referred to a 2003 agreement between the US and Libya under which the country had agreed to surrender its uranium enrichment facilities to the US. It was earlier suggested by Trump’s National Security Adviser (NSA), John Bolton, as a possible model to get North Korea to agree to denuclearisation.

“The model, if you look at that model with Gaddafi, that was a total decimation. We went in there to beat him. Now that model would take place if we don’t make a deal, most likely. But if we make a deal, I think Kim Jong-un is going to be very, very happy,” Trump said.

Trump’s statement is likely to damage the already fragile peace talks going on between the US, North Korea and South Korea. The proposed summit between Trump and Kim Jong-un on 12 June is also now under doubt. The agreement over the summit, for a while, seemed to appear as the furthest the countries had progressed towards peace in the Korean peninsula.

Talks between North and South Korea too stand suspended after North Korea reportedly cited an ongoing military exercise between the US and South Korea as a threat to itself.

However, commenting on the peace process, Trump has assured that North Korea has “been negotiating like nothing happened”.