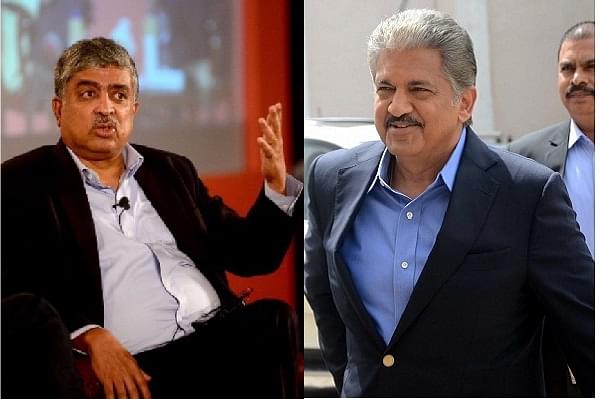 Mahindra group chairman Anand Mahindra and Infosys co-founder Nandan Nilekani have zeroed in on 'TecHalli' as the new title for Bengaluru, days after the former asked the Twitterati to suggest new a title for the tech city, instead of calling it the 'Silicon Valley of India.

Taking to Twitter on Saturday, Anand Mahindra said, "We have a result: @NandanNilekani who agreed to be a co-judge shortlisted four entries and then we both converged on one entry from those that we thought was the most appropriate. And the winner is (Drumroll please) 'TecHalli' submitted by @SrinivasPReddy."

Explaining why he feels that 'TecHalli' is the perfect name for Bengaluru, Anand Mahindra said the entry cleverly put the 'H' in Tech to double use.

"By capitalising the 'H' he drew attention to 'Halli' meaning village/place in Kannada. So we now go from Silcon Valley to TecHalli! Srini, DM@MahindraRise your mailing address to receive a model Pininfarina H2 Speed car," Anand Mahindra said.

He also replied to the Twitterati who said that many would not know the meaning of 'TecHalli'.

One user tweeted, "Good and congratulations to the winner. But Silicon Valley is a metaphor and when u say TecHalli of India internationally, no one will understand what it means unless they know Kannada."

To this, Anand Mahindra replied, "Well it's time they made an attempt to understand what it means. Much of the world doesn't speak English and didn't initially understand what Silicon Valley meant either."

Welcoming the new name, another user said that Bengaluru was a 'Halli' (village) once upon a time before transforming into a Silicon Valley.

"So TecHalli is a reminder to all of us that we should not forget our roots," he said.

On Tuesday, Anand Mahindra had thrown up the challenge on Twitter by asking the Twitterati to give a new title to Bengaluru, instead of calling it the 'Silicon Valley of India'.

In a series of tweets, Anand Mahindra had said that he was not 'thrilled' with the city (Bengaluru) being called the 'Silicon Valley of India'.

The discourse started after Mahindra tweeted a news article that stated that non-stop Bengaluru-San Francisco flight is likely to resume from June 10.

"A Shuttle between 2 High tech Valleys! Like many, I'm not thrilled by Bengaluru being called 'Silicon Valley of India'. Too derivative & 'wannabe'. What do you think would be a good, original title for India's High-Tech capital? Haven't had a caption competition for a while," he said in a tweet.

"The person who gives the best title for Bengaluru stands to win a special prize picked by him," he said.

In another tweet announcing the prize for the best caption, Anand Mahindra posted a picture of a scale replica of the Pininfarina's H2 Speed car and wrote, "So here's a variation on the caption competitions. This is the gift for the person who sends in what I feel is the best suggested new title for Bengaluru in place of Silicon Valley of India."