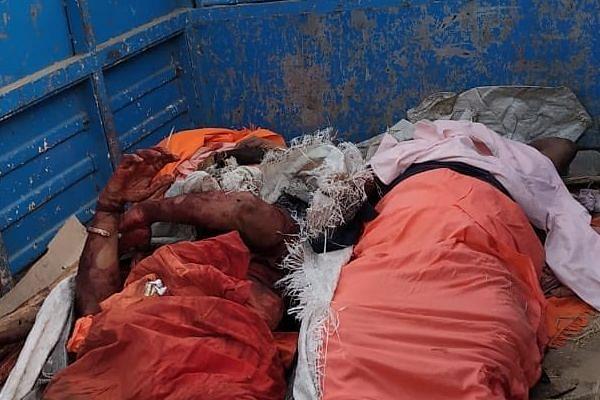 In a gruesome incident in Palghar district of Maharashtra on 16 April, three persons including two sadhus were lynched to death by a huge mob of villagers outside Gandchinchle village - 125 kilometres from Mumbai - on suspicion of being child thieves.

At least three vehicles, including two belonging to the police, were damaged in the incident and additional forces were rushed to the site to control the situation. Several cops were also injured.

The incident remained largely out of the public glare until 19 April when videos of the lynching surfaced on the social media.

The videos show an aged man clad in saffron being escorted by a cop out of a building. A crowd wielding sticks is waiting outside. As the aged man comes out, looking scared and bleeding on the head, the crowd takes him away and begins to beat him mercilessly. The video shows no intervention by the cop. Another video shows a group of people breaking the glass windows of a police vehicle.

This tragedy from Palghar is really heart breaking and barbaric
Where are we heading as a society ð
I request @CMOMaharashtra to take strict action against the culprits
No mercy or leniency whatsoever, I have no words to describe my sorrow or anger ð @DGPMaharashtra pic.twitter.com/nF6Xy7MWqk

The ‘Juna Akhara’, as it is more commonly known, is considered by many to be the largest and oldest order of sadhus in India. Last year, it was much in news for designating a Dalit sanyasi as “Mahamandaleshwar”, which is an influential position in the order.

The third victim has been identified as Nilesh Telgane (35), who was a driver.

In a report published two days ago, Hindustan Times quoted Anandrao Kale, an assistant police inspector (API) with Kasa police station, as saying that the three men were in an Ecco van and were coming from Nashik, when the vehicle was stopped by a mob near Gadhchinchale village on Dabhadi-Khanwel road.

The driver managed to summon the police, which rushed to the spot on the Dhabade-Khanvel Road, as per API Kale.

The police took the trio into their van for inquiry even as the crowd continued to protest and demand action against "the robbers".

The mob, said to be around 200, grossly outnumbered the police and soon started assaulting the three victims with stones, sticks and other objects, the police said.

The three were later pronounced dead and their bodies have been sent for autopsy to a local government hospital, IANS quoted a Palghar Police spokesperson as saying.

The police have reportedly registered a case under section 188 (disobedience), section 302 (murder) of the Indian Penal Code (IPC) and Disaster Management Act, 2005, and Epidemic Diseases Act,1897.

On 18 April, NDTV quoted Kailash Shinde, the district collector, as saying that 110 people have been taken into custody.

In a letter to Maharashtra chief minister Uddhav Thackeray, the Juna Akhara said that the sadhus were on their way to Gujarat to attend the funeral rites of their guru, Mahant Ramagiri.

The Sadhus had a name. A few media that do appear don't have their names like Akhlaq. Sadhu Kalpvriksh Giri Age 70 Yrs & Sadhu Sushil Giri Age 35 Yrs. Imagine if some Maulvis would have faced same situation. Heart wrenching. pic.twitter.com/aav56HQXKY

The Akhara has said that the police remained a mute spectators to the sadhus’ killing and asked the chief minister why the police did not open fire.

The incident also comes three days after the vehicle of a prominent medic, Vishwas Salvi, was similarly attacked when he was proceeding to conduct thermal screening of villagers and distribute relief food materials.