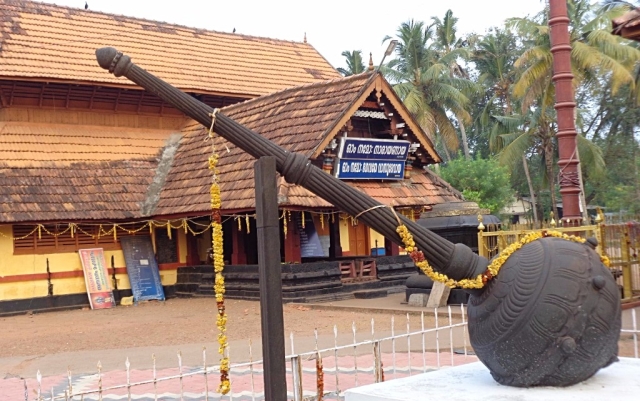 The Gada at the Tiruppuliyoor Temple found by Bhim, one of the temples in the circuit. (Dvellakat via Wikimedia Commons)

The Travancore Devaswom Board (TDB) has drawn up an ambitious plan to transform the five Pancha Pandava temples in Kerala to a pilgrim-tourist circuit, PTI has reported.

As the legend goes, the five shrines dedicated to Lord Vishnu at Thrichitat, Thiruppuliyoor, Thiruvaranmula, Thiruvanvandoor and Thrikkodithanam, located along the banks of river Pampa were each installed by a Pandava.

The project is a part of Centre’s Swadesh Darshan initiative that aims towards theme-based development of destinations. Another similar circuit for five temples dedicated to Lord Ayyappa is also being planned.

The board manages 1,200 temples in the state and plans to renovate the Pandava temples, improve their basic infrastructure and set up more lodging facilities for pilgrims under the initiative.

"A pilgrim-tourism circuit connecting Pandava temples is an innovative concept. According to our belief, the Pandavas had installed the idols of these shrines when they set out on a pilgrimage", TDB president A Padmakumar said.

Besides the local devotees, a large number of pilgrims, especially belonging to Iyengar community (a Vaishnavite sect) from neighbouring Andhra Pradesh and Tamil Nadu, also visit the shrines, collectively known as 'Vaishnava Tirupati', he said.

"Steps are already on to prepare a detailed plan for the pilgrim-tourism circuit. We will soon conduct discussions with the state and central governments to allot enough funds for the same," Padmakumar said.

Due to paucity of funds, poojas are carried out only once a day at Thrichittat temple now and getting more funds would be a boon for the shrine to meet its daily needs, the TDB president added.