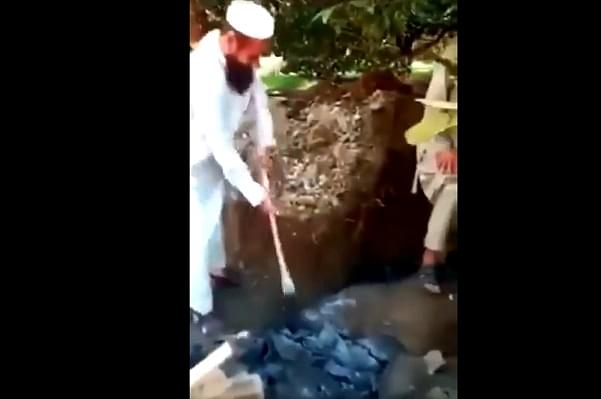 In a shocking development, a historical statue of Gautam Buddha, discovered while digging the foundation for a house in Khyber-Pakhtunkhwa province in Pakistan, was destroyed by the local construction workers as they considered the artefact to be ‘unIslamic’, reports Hindustan Times.

The local construction workers on Saturday (18 July) had discovered the ancient statues in Takht Bhai area in the Mardan district of the province. The native cleric of the region allegedly ordered the workers to smash the idol into pieces, who can be seen using a sledgehammer for doing the unfortunate deed.

During digging, a giant statue of Buddha was discovered in Takhtbhai, Mardaan, KPK, ðPakistan.
Molbi came and said that break it. If you do not, you will burn in hell.
Therefore people found short cut to heavens. Breaking heritage, ashamed of origin. Society of such hypocrites. pic.twitter.com/lPk4ts9kK2

Notably, the area was once part of the Gandhara civilisation which flourished around 200 years before Christ. Archaeologists have dug of hundreds of ancient artefacts since the excavations began in 1830s.

As per the report, Pakistani authorities have taken note of the incident and are looking into the matter.

The report quotes Abdul Samad, director, archaeology and museums, Khyber Pakhtunkhwa, as saying that those involved in vandalism would be held accountable. “We have located the area and we will have those involved arrested soon,” he said.