‘Will Jail Election Commission If Voted To Power’, Says Ambedkar’s Grandson; Gets Booked 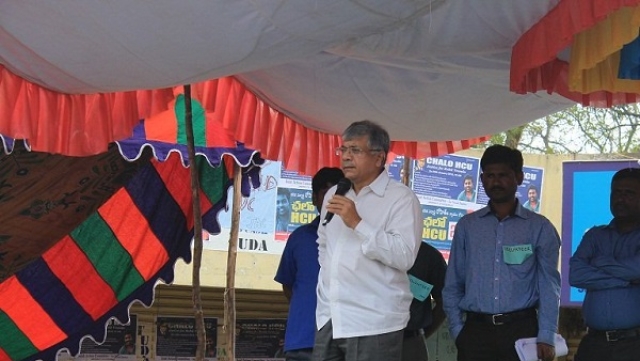 A case has been registered against the grandson of B R Ambedkar and Bharip Bahujan Mahasangh (BBM) president Prakash Ambedkar for allegedly making derogatory remarks against poll body Election Commission of India (ECI), reports MoneyControl.

"We have lost 40 soldiers (in Pulwama), but still sitting quietly. We have been asked not to speak on the Pulwama attack. How can the EC gag us? Our Constitution has given us the right to speak. I am not the BJP. If voted to power, we will jail the Election Commission for two days," said Ambedkar on Thursday (4 April) while addressing an election rally at Digras in Maharashtra's Yavatmal district.

Following this, the Yavatmal district collector (DC) filed a complaint against Ambedkar at the Digras police station and a case under Indian Penal Code (IPC) sections 503 (criminal intimidation), 505 (statements conducing to public mischief) and 189 (threat of injury to public servant) has been registered.

To contest the upcoming Lok Sabha polls, Ambedkar has launched the "Vanchit Bahujan Aghadi", an alliance with the Asaduddin Owaisi-led All India Majlis-e-Ittehadul Muslimeen (AIMIM).

It should be noted that this is not the first time that Ambekar has made controversial statements. In an earlier rally, he had said that “if he was voted to power, the notes scrapped by the Modi government will be remonetised,” referring to Prime Minister’s Demonetization exercise.

Also Read: ‘Congress Fought Ambedkar, Ruled For So Long But Did Nothing For Us’: Bhim Army Rules Out Support To Priyanka Gandhi