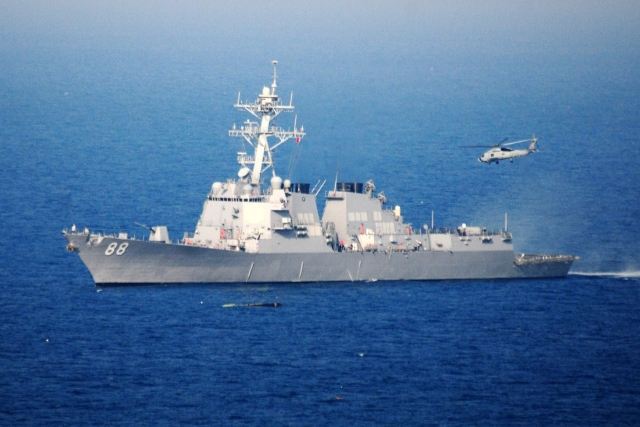 In a move that is likely to increase the tensions between United States and China, the US military said that it one of its warships sailed near the disputed Scarborough Shoal claimed by Beijing in the South China Sea on Sunday (19 May), reports NDTV.

According to the report, the US Navy destroyer Preble carried out the operation in the South China Sea. "Preble sailed within 12 nautical miles of Scarborough Reef in order to challenge excessive maritime claims and preserve access to the waterways as governed by international law," Commander Clay Doss, a spokesman for the Seventh Fleet of US Navy, was quoted in the report as saying.

The operation was latest of the US attempts to counter the Chinese efforts to limit freedom of navigation in the strategic waters of South China Sea. China claims all of the strategic South China Sea and frequently criticizes US and its allies for operations around China-occupied islands.

Several other countries including Indonesia, Philippines, Taiwan, Vietnam and Malaysia also have competing claims to the region.

However, China in a bid to consolidate its claims have built artificial islands and set up military installations on them.