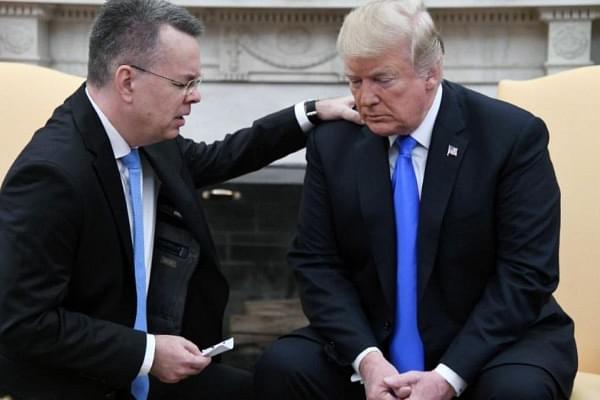 An American evangelical preacher, who was held for two years in Turkey on charges of terrorism, returned to the US on Saturday, ending a major diplomatic dispute that threatened to wreck the relationship between the North Atlantic Treaty Organization allies, The Wall Street Journal has reported.

Upon his arrival in US, the released pastor, Andrew Brunson, visited President Trump in the Oval Office.

Turkish authorities had released Brunson on Friday, two years after detaining him on terrorism charges.

Brunson was jailed in 2016 on charges that he abetted a failed coup attempt against President Recep Tayyip Erdogan. His wife, Norine, was arrested along with him but released 13 days later.

“My thoughts and prayers are with Pastor Brunson, and we hope to have him safely back home soon!” Trump wrote on Twitter, adding later, “PASTOR BRUNSON JUST RELEASED. WILL BE HOME SOON!”

Brunson’s arrest riled up Christians in the US and Trump’s speeches often mentioned his arrest.
Vice President Mike Pence had personally intervened and made a request to Turkish President Erdogan for the pastor’s release. Turkey’s refusal to release the pastor even prompted the Trump administration to impose economic sanctions.
The release of the Prebestyerian pastor is a shot in the arm for Trump and comes just before the mid-term polls, which is widely expected to bolster his prospects among the Christian evangelical voters, who form a huge support base for the Republican Party.