US Postal Worker Alleges He Was Ordered To Back-Date Late Mail-In Ballots To 3 November: Project Veritas 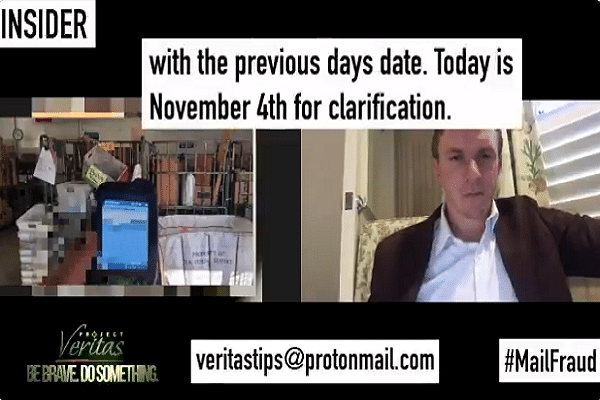 Activist group Project Veritas in a video released today (5 November) has quoted a purported United States Postal Service (USPS) official as alleging that he was directed by his superiors to backdate mail-in postal ballots to 3 November to allegedly stop them from becoming ineligible.

âSeparate them from standard letter mail so they can hand stamp them with YESTERDAY'S DATE & put them through"#MailFraud pic.twitter.com/n7AcNwpq80

In the video published by James O'Keefe the founder of Project Veritas the alleged USPS employee works at the Barlow post office branch in Michigan's Traverse City.

The employee alleged that his boss directed him and his colleague on 4 November to collect any ballots they find in the outgoing mail like mailboxes, collection boxes, so that they can be hand-stamped with the previous day's date (3 November).

The whistleblower added that he was told by a postal worker in another branch that he had allegedly seen the postmaster stamping ballots with the previous day's date.

This led to O'Keefe questioning whether these orders were a means to allow late mail-in votes to be counted. The absentee ballots in Michigan had to arrive by 8 PM on Election Day to be eligible for counting.

O'Keefe has now claimed that his organisation has been contacted by the office of the Inspector General of USPS and they are now considering launching an investigation.

It was earlier reported that a prominent Trump supporter shared voting records which allegedly show dead people having cast their votes in Michigan. The voters were born in 1900, 1901 and 1902 - older than the oldest living American.