U.S. Removes All Restrictions On Officials’ Dealings With Taiwan, Says It Was Imposed To "Appease The Communist Regime In Beijing” 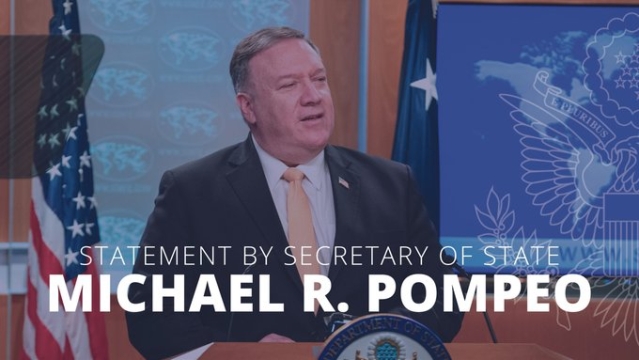 The U.S. has eased restrictions related to diplomatic and other official dealings with Taiwan, Secretary of State Mike Pompeo announced on Saturday (Jan 9).

The latest move by the outgoing Trump administration, aimed at bolstering Washington’s relationship with Taipei, is likely to incur the wrath of China.

While the Trump administration has been expanding its relationship with the island country, with arms sales and new laws to help Taiwan deal with pressure from China, the latest move goes further.

“Taiwan is a vibrant democracy and reliable partner of the United States, and yet for several decades the State Department has created complex internal restrictions to regulate our diplomats, service members, and other officials’ interactions with their Taiwanese counterparts,” Pompeo said in a statement.

“Today I am announcing that I am lifting all of these self-imposed restrictions,” he said, calling them “null and void”. He added that the US government had originally put them in place “in an attempt to appease the Communist regime in Beijing”.

"Additionally, any and all sections of the Foreign Affairs Manual or Foreign Affairs Handbook that convey authorities or otherwise purport to regulate executive branch engagement with Taiwan via any entity other than the American Institute in Taiwan (AIT) are also hereby voided. The executive branch‘s relations with Taiwan are to be handled by the non-profit AIT, as stipulated in the Taiwan Relations Act." the statement aded

Welcoming the move, Taiwan’s mission to the U.S. said in a statement “The State Department’s actions to further Taiwan-U.S. engagements reflect the strength and depth of our relationship,”. “We look forward to broadening the Taiwan-U.S. partnership in the months and years ahead.” it added.

U.S. and Taiwan don’t have official relations ever since Washington snapped diplomatic ties with Taipei in 1979.