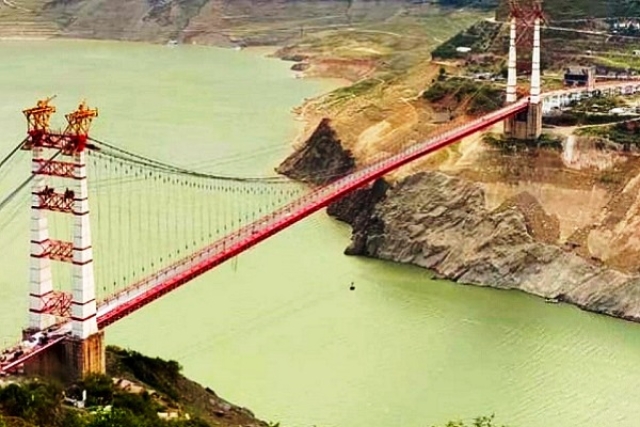 Uttarakhand chief minister Trivendra Singh Rawat has announced the dedicating of the Dobra-Chanti bridge to the people of Tehri district.

The completion of the bridge, which has spanned 14 years, allows the people of Pratapgarh and Thauradar to connect with each other.

It opens better and shorter access to the district headquarters, which was marred by the absence of connectivity over the Tehri lake.

The detour would require people to travel 100 km in the absence of a bridge.

It is said to be the longest motorable single lane bridge in India. Rawat had promised the people of the region the opening of the bridge for use in 2020.

Rawat has highlighted the pushing of budgets for the work towards the bridge in his post on Twitter -- to avoid any delay in the completion. He has said that his government had prioritised the completion of the bridge.

The local media in Uttarakhand has been upbeat on the development. The construction and completion of the bridge met several hurdles over the years.

The news of the installing of special lights on the bridge has been highlighted in the local media. Connectivity and access are central to the region.

The bridge addresses a big safety concern for the people of the region.

The bridge is equipped with an electronic control system, a panel room, CCTVs and street lights.

The bridge is expected to become a prime tourist attraction in the region, as it runs over the beautiful witness of Tehri's own existential history -- the Tehri Lake and connects two destinations.