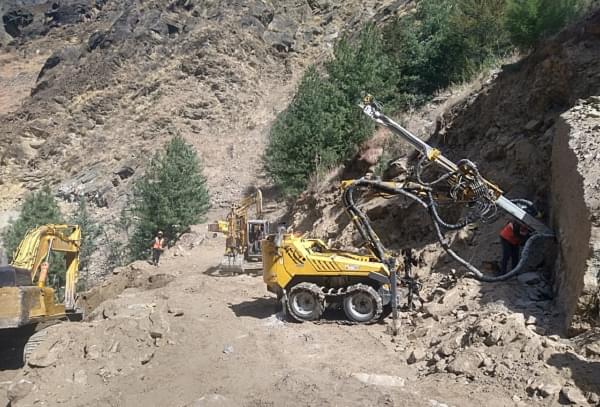 The flash floods occurred in Uttarakhand on 07 February washed away a 90-metre span RCC bridge on Joshimath-Malari road located approximately two kilometres upstream of the Tapovan Hydel project. Washing away of the bridge has disconnected more than 13 border villages in Chamoli district of Uttarakhand.

After initial recce, the Border Roads Organisation (BRO) has started work for re-establishing connectivity on all required fronts, the Ministry of Defence said in a statement.

The upcoming bridge site is very challenging due to steep cliff on the far bank and 30 metre high debris/muck on the other side, however, the BRO has overcome these challenges.

The BRO is working round the clock to re-establish connectivity at the earliest by launching a bailey bridge of 200 feet. The BRO is also assisting Indo-Tibetan Border Police (ITBP) & National Disaster Response Force (NDRF) in rescue operations.

Almost 200 personnel of 21 BRTF of Project Shivalik have been deployed for rescue and rehabilitation in the area.

BRO has inducted more than 100 Vehicles/Equipment which include about 15 Heavy Earth Moving Equipment like Hydraulic Excavators, Dozers, JCBs, Wheel Loaders, etc for this purpose. The BRO has also airlifted critical equipment with the help of Indian Air Force.

A portion of the Nanda Devi glacier broke off in Uttarakhand’s Chamoli district on 07 February, triggering an avalanche and deluge in the Alakananda river system. The sudden flood in the middle of the day in the Dhauli Ganga, Rishi Ganga and Alakananda rivers, all intricately linked tributaries of the Ganga, triggered widespread panic and large-scale devastation in the high mountain areas.