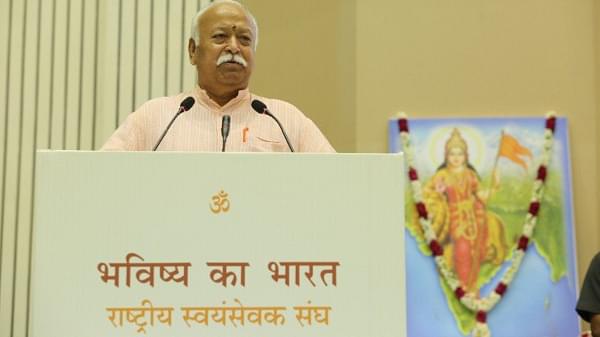 Addressing a gathering on Tuesday, RSS Chief Mohan Bhagwat declared that 'Hindu Rashtra' is an inclusive concept and does not intend to exclude Muslims or any other religious minorities, reported The Economic Times. Proclaiming that the RSS believes in taking everyone along.

"The Sangh works towards universal brotherhood and the cardinal principle of this brotherhood is unity in diversity. This thought comes from our culture, which the world calls Hindutva. That's why we call it a Hindu Rashtra," he said.

In an attempt to draw parallels between the philosophies of BR Ambedkar and Hindutva, Bhagwat talked about Ambedkar’s emphasis on universal brotherhood and fostering fraternity among countrymen, and the Sangh’s advocacy of Hindutva, which in his words is synonymous with the idea of ‘Bhartiya’, a word that defines all Indians and the Indian society.

"We (people of India) are divided in various states, languages and castes. In spite of this, we claim to be the progeny of Bharat Mata and the followers of universal human values," he said.

Bharat is the trustee for the knowledge that can be termed as Global Dharma. #RSSVision #FutureBharat pic.twitter.com/Dng9Wyqbri

He spoke at length about the essence of Hindutva and the Sangh’s belief in ‘Sarvepi Sukhinah Santu’. Calling the followers of Islam as the sons of ‘Bharat Mata’, he added that though our methods of worship might be different, we share the same blood and soil.

The event was attended by dignitaries of countries such as the US, Singapore, Germany, Japan and Serbia. Also in attendance were Union Ministers Prakash Javadekar, Giriraj Singh and Vijay Sampla, KC Tyagi of the JD(U), retired judges and ex-army commanders.