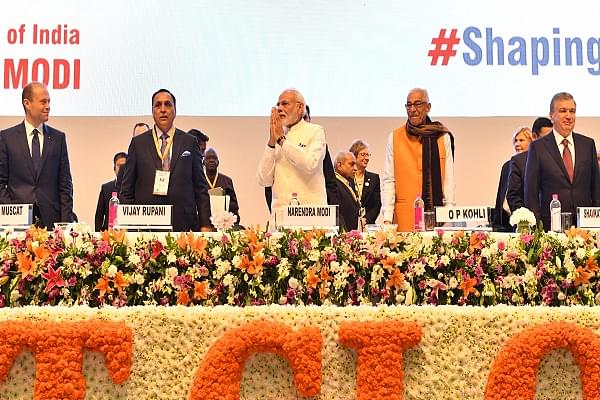 PM Modi along with other dignitaries at the 9th Global Vibrant Gujarat Summit in Gandhinagar. (@narendramodi/Twitter)

Speaking at the 9th Global Vibrant Gujarat Summit in Gandhinagar, Prime Minister Narendra Modi on Friday (18 January 2019) stated that India aims to crack the top 50 in the world ease of doing business rankings by next year, reports Financial Express.

India is currently ranked 77th in the list, having climbed 65 spots in last four years.

“I have asked my team to work harder so that India is in the ‘Top 50’ list in ease of doing business next year,” Modi stated during his inaugural address at the summit.

The prime minister asserted that the focus of his administration is to remove barriers which were obstructing India from reaching its full potential; he promised to continue with the same pace of reforms and deregulation.

He pointed out that the average annual GDP growth rate of 7.3 per cent over the last four years of his government, is the highest since 1991.

The Vibrant Gujarat Summit’s history goes back to 2003 when it was first conceptualised by Modi, the then chief minister of Gujarat, to reinvigorate the investment climate in the state.

The event has, over the years, become a platform to brainstorm agendas relating to global socio-economic development, as well as a platform for knowledge sharing and developing successful partnerships.