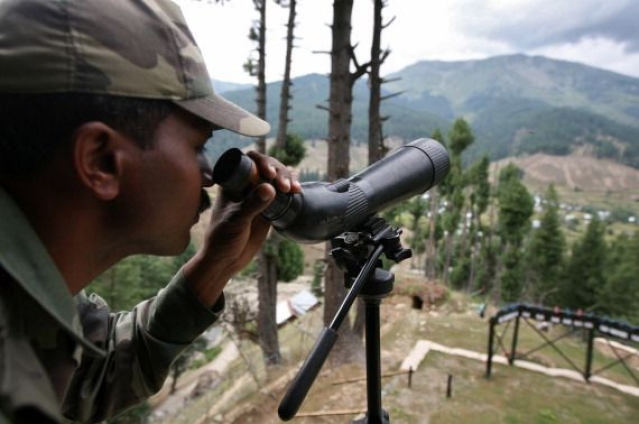 An Indian Army soldier keeps a close watch on the Line of Control in Gurez, Kashmir. (Representative Image) (Farooq Khan-Pool/GettyImages)

Amid the escalating tensions between India and Pakistan over Kashmir issue, the Pakistani Army has moved over 2,000 soldiers in the Bagh and Kotli sector near the Line of Control (LoC) in Pakistan-occupied Kashmir, reports Times of India.

According to the report, the troops have been moved from a peace location and are stationed around 30 km from the LoC, Indian Army sources were cited as saying.

"At present, they have not been deployed in offensive posturing. However, the Indian Army is closely watching their movements," the sources were quoted in the report as saying.

The movement of the troops of Pakistani Army has come at a time when it has already activated its terrorist infrastructure. The Pakistan-based terror outfits like Lashkar-e-Toiba (LeT) and Jaish-e-Mohammed (JeM) have reportedly started recruiting locals and Afghans in a bid to train them to carry out attacks in India.

As per the report, sources added that the Pakistani Army troops that have been moved to LoC are close to a brigade-size and their numbers would be more than 2,000.

Ever since India revoked the special status of Jammu and Kashmir, Pakistan has been trying to draw International attention and intervention by terming the prevailing situation between both countries as very tense.

This was in my view the most important message in #DGISPR_Presser and spells out Pakistan's policy for those who need to know.

Pakistan will go to war if Kashmir's freedom is not secured through other means. pic.twitter.com/BFse2SE2cv

He said that if other means could not stop alleged atrocities in Kashmir then “warfighting becomes an option by compulsion, if not by choice,”