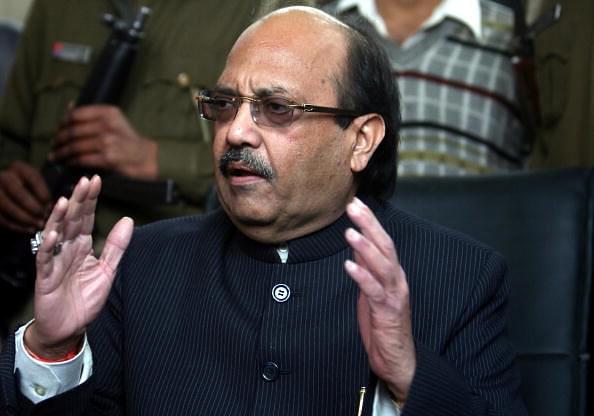 In an oblique reference to Muslim appeasement by the Samajwadi Party, Amar Singh, one of its top leaders has termed the outfit as ‘Namazwadi’.

Reportedly scared due to threats of public lynching against him and his family made by Azam Khan, Singh also blamed him for the 2013 riots in Muzzafarnagar. Here is the video posted by Amar Singh.

Singh, who was expelled from SP by Akhilesh Yadav after the latter took over as its supremo, has attacked Khan, his former colleague, and blamed him for Muzaffarnagar riots of 2013. Singh said, "Till the time leaders like Mulayam Singh Yadav will prop up politicians like Azam Khan, riots like 2013 will continue to take place."

Khan was under fire from former SP leader as the Rampur MLA, in an interview to a private news channel, had reportedly said 'When people like Amar Singh will be publicly lynched, his wife beaten up and acid thrown on his daughters, then they will mend their ways'.

The New Indian Express reported reported Singh saying that he is a scared father.  "Today I am sitting here as a father of two 17-year-old daughters. Now we feel scaredwhen they go to school. My wife cries. I want security for my daughters."

Singh extended the blame for the support Khan gets in the party, to former SP supremo and senior leader Mulayam Singh Yadav. He added, "Had Mulayam Singh Yadav condemned Azam Khan even once for what he said about my family, I would not have called it a Namazwadi Party."

Singh's attack was not restricted to senior Yadav and Khan. When asked to comment on SP supremo Yadav's promise to build 'Vishnu Nagari', Singh said, "How can a 'Namazwadi' party chief can construct a Hindu temple?"