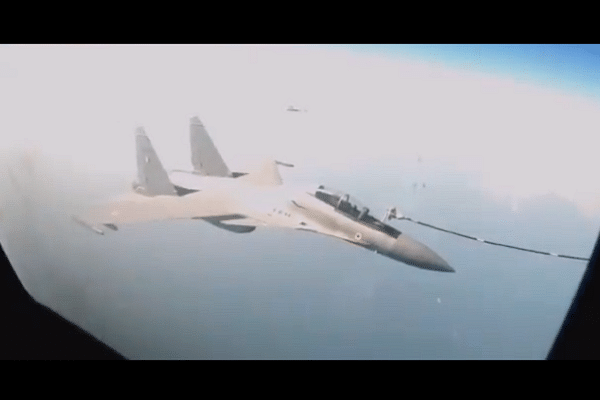 Four Sukhoi Su-30 fighter jet of the Indian Air Force (IAF) has been captured on camera undergoing mid-air refuelling from an IL-78 FRA Aircraft while flying in a diamond formation.

Gp Capt Antil says "Air-to-Air refueling is not an easy task. Pilots need to get their speeds right, get in correct formation and synchronise with the refueler". pic.twitter.com/CvrC8jwhJy

The video shows each aircraft moving up to engage with the flying boom of IL-78 and tanking-up after establishing proper contact with the refuelling pod.

After filing up the fuel tank, the aircraft successfully disengage from the flying boom to rejoin their formation for extended operation.

A tricky operation, mid-air refuelling needs proper synchronisation with the tanker and pilot needs to keep the aircraft steady while maintaining proper speed and formation to prevent any mishap.