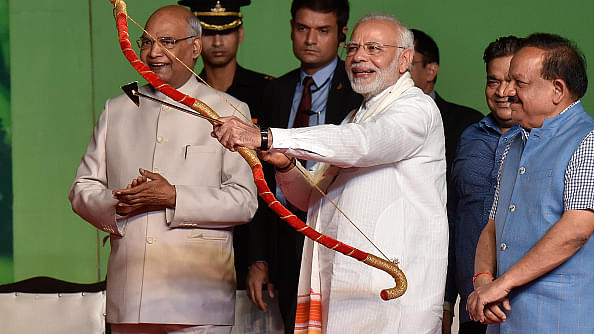 Prime Minister (PM) Narendra Modi on Wednesday (5 February) announced in parliament setting up of a trust that will undertake the task of construction of a Ram Temple in Ayodhya, as per the Supreme Court verdict in the Ayodhya land dispute case in November 2019, News 18 reported.

The Union cabinet has cleared a trust for the construction of Ram temple at Ayodhya, the PM informed the Lok Sabha.

“I am happy to announce that in the cabinet meeting today morning, we took significant decisions on the Ayodhya trust. As per the orders of the Supreme Court, we have set up a trust. The Sri Ram Janma Bhumi Tirtha Shetra will be the name of the trust. It will be an independent body,” he said.

The Trust will be free to take all decisions regarding creation of a magnificent #RamTemple in #Ayodhya: PM @narendramodi#cabinetdecisions pic.twitter.com/dYoGZT0yKr

According to the PM’s announcement, the trust will be free to take all necessary decisions regarding the temple construction.

Prime Minister said as per the Supreme Court order, 5 acre land will be given to the Sunni Waqf Board for the construction of a mosque.

He said the Uttar Pradesh government will provide the land to the Muslims.

Prime Minister also thanked the people of India for showing utmost restraint in the aftermath of the Supreme Court judgement on Ayodhya land dispute.

On 9 November last year, the Supreme Court in a historic judgment gave the Ramjanmabhoomi to Hindus for the construction of temple rejecting the claims of the Muslims.