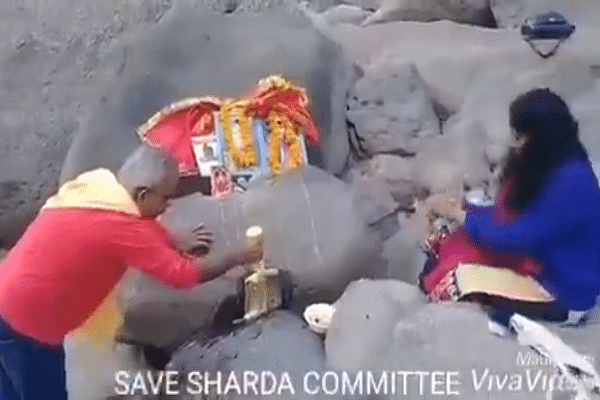 In a historical moment, a Hong Kong couple, P T Venkatraman and Sujatha Venkatraman, performed a puja on the banks of the Kishanganga (Neelum) river in Pakistan-occupied-Kashmir (PoK). Although they wanted to offer prayers at the ancient Sharada Peeth temple, they were denied permission by Pakistani authorities but were allowed to conduct the puja at this location, situated some 100 km away from the temple.

A video of the puja ceremony can be viewed below:

May we soon have Restoration of Sharada Peeth !

This is the first time that a puja has been performed on the banks of the Kishanganga river anywhere close to Sharada Peeth in 72 years. The temple complex itself has been entirely non-functional since coming under Pakistani control and has consequently also not been well maintained at all.

The Kashmiri Pandit community, for whom the Sharada Peeth temple holds special significance, has made repeated attempts in the past to ask the Pakistani government to allow Hindus from India to go and pray at the ancient shrine, but these requests have till now not received a positive response from the Pakistani side.