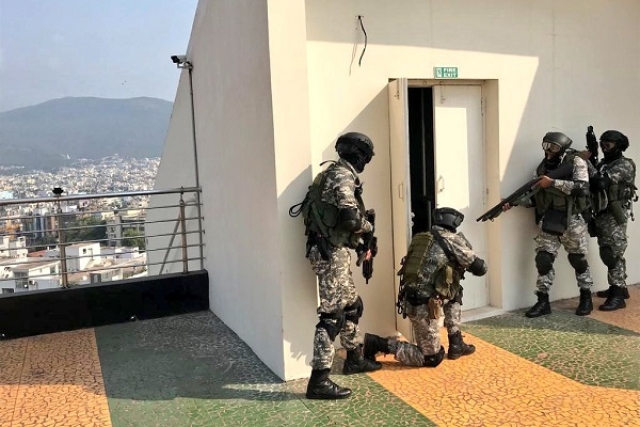 MARCOS commandos during the drill

In an awe-inspiring demonstration of their extreme agility and specialised training, the elite marine commandos (MARCOS) of Indian Navy conducted a hostage rescue mock drill in Visakhapatnam.

Rappelling down from a Seaking 42C helicopter of Indian Navy, the commandos conducted a full scale mock operation one of the high rise buildings of the city.

MARCOS is the special forces unit of the Navy that specialises in various operations carried out across varied tasks from maritime theatre to the amphibious operations to the counterinsurgency and counter-terror operations.

The core task of the MARCOS ranges across conducting classified attacks against enemy ships, offshore installations and other vital assets behind enemy lines, supporting amphibious operations including pre-assault ops, conducting of surveillance and recce missions in support of naval operations, conducting of clandestine diving operations, and combating terrorism in a maritime environment.

The MARCOS personnel have been deployed in a variety of different scenarios, from insurgency-hit Kashmir to fighting pirates in Somalia.