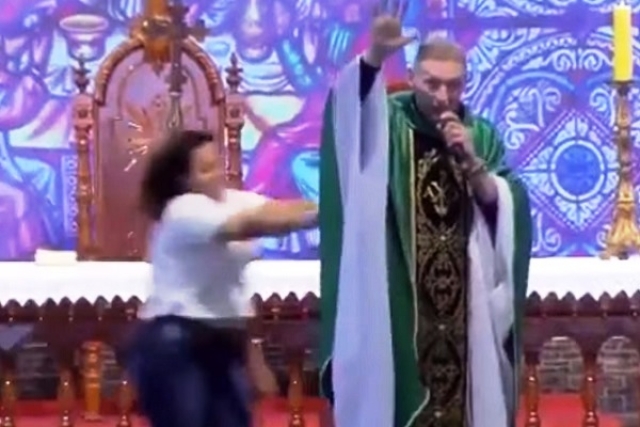 Christian pastor right before being pushed off stage (Video screengrab)

A pop-star Christian priest in Brazil was caught on camera being pushed off stage during one of his sermons by a woman.

The incident happened on Monday (15 June) when Father Marcelo Rossi was delivering a mass in Sao Paulo’s Cachoeira Paulista during the closing ceremony of a youth camp in front of 50,000 spectators.

Rossi, who has been dubbed as a ‘pop-star priest’ for selling millions of musical records in the country.

As per various claims on social media, the woman decided to push the pastor off stage after he claimed that “fat women cannot go to heaven”.

So an angry woman who had enough of his rubbish ran onto the stage and....

She later appeared to have taken pride in her act and was seen smiling after the priest fell off stage. She was then detained by the police and is said to be suffering from mental health problems.

“I was just going to talk about pain but I did not imagine it was going to be like this," the priest said after eventually making his way up on the stage.