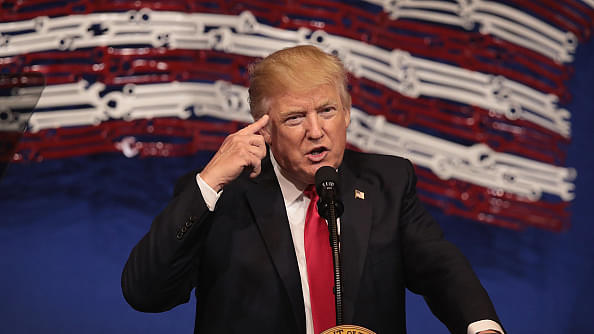 Trump lambasted Acosta after the CNN reporter appeared to be haranguing the President on the migrant caravan and ongoing Russia investigation and refusing to give up the microphone. “That’s enough. Put down the mic,” Trump shouted while Acosta pushed a staffer’s arm away as she tried to confiscate his microphone.

“I tell you what, CNN should be ashamed of itself having you working for them. You are a rude, terrible person. You shouldn’t be working for CNN.” Acosta earned Trump’s ire as he insisted that Trump concede that the caravan of Central American migrants headed toward the southern border did not constitute an “invasion” as Trump had previously claimed.

“The caravan was not an invasion, it is a group of migrants moving up the border from Central America towards the border with the US,” Acosta argued. “Thank you for telling me that, I appreciate it,” Trump retorted and denied that he “demonised” immigrants as part of his messaging strategy ahead of the midterm elections.

Acosta, however, continued to rudely interrupt and outshout Trump, insisting that Trump was overlooking the caravan’s distance from the border. “They’re hundreds of miles away, that’s not an invasion,” Acosta said.

“Honestly, I think you should let me run the country, you run CNN and if you did it well, your ratings would be much better,” Trump said. NBC Correspondent Pete Williams was given the next question and used part of his allotted time to defend Acosta, whom he referred to as a ‘diligent reporter.’

“Well, I’m not a big fan of yours either, to be honest,” Trump responded. Acosta then rose from his chair again and began speaking over his fellow reporter, prompting Trump to once again characterise him and his network as the ‘enemy of the people.’

A statement released by CNN said that Trump’s attacks ‘have gone too far,’ and ‘are not only dangerous, they are disturbingly un-American.’ “A free press is vital to democracy, and we stand behind Jim Acosta and his fellow journalists everywhere,’ added the network.