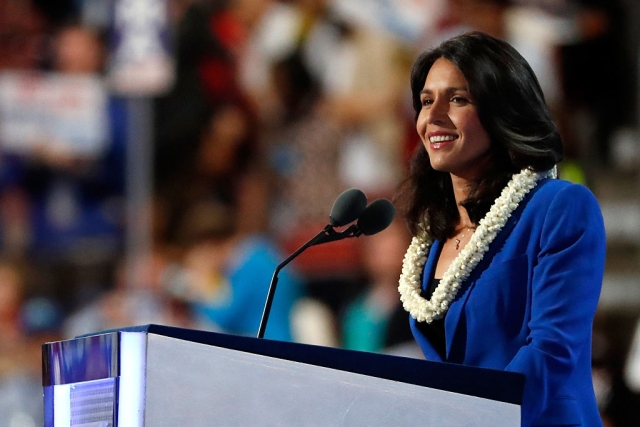 The United States Presidential candidate and Democratic Congresswoman Tulsi Gabbard slammed a woman purported to be a Journalist for levying charges on her without evidence.

In a video shared on YouTube, the first American Hindu Congresswoman can be seen addressing a gathering of people in a room. As Tulsi was delivering her speech, an alleged journalist interrupts and accuses her of being an apologist of Prime Minister Narendra Modi.

The journalist alleged that Tulsi was instrumental in changing perception about PM Modi in United States. She further added that “many” consider PM Modi to be “complicit” in the 2002 Gujarat riots.

“Do you know what instigated those riots?” Tulsi asked the journalist, who had no answer to the question.

“You are levying a very serious accusation against me without presenting facts to back them up,” Tulsi said while adding that her focus as a member of US Congress has always been to serve US and its people.

She added that India is an important partner of the US in the region and said that the Indo-US association is vital not only for economic and security but also for educational and cultural reasons.

The Journalist then alleged that Tulsi is getting money from the Rashtriya Swayamsewak Sangh (RSS) for her campaign.

Responding to her, Tulsi asked her to back her allegation with evidence. “ If you are gonna make these arguments, you better have the evidence to back it up, because you are wrong,” said Tulsi.

The Congresswoman added that the contributions she is getting for her campaign is coming from American citizens.

“What you are doing right now is levying a criticism against American citizens, who happen to be Hindus, who are involved in our (American) democratic process,” the US lawmaker said.

Earlier on 18 September, Gabbard had slammed controversial journalist Rana Ayyub for spreading misinformation over her not attending Prime Minister Narendra Modi’s mega rally in the US.