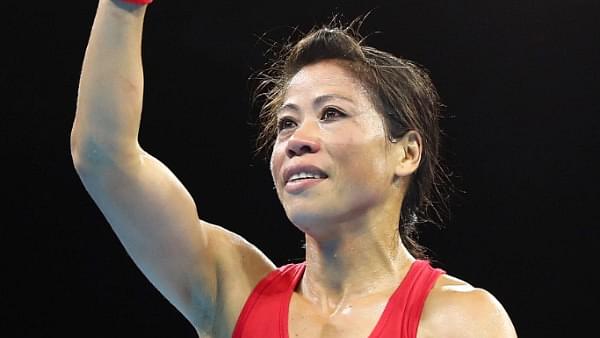 Sports Minister of India Rajyavardhan Singh Rathore and five-time World Boxing Champion Mary Kom faced each other in a friendly fight. In a Twitter video posted by Mary Kom, thanking Minister Rathore for his support and encouragement, both are seen participating against the other in a friendly bout.

While Mary Kom is kitted up with her Boxing gloves, the Olympian silver medalist and retired Army Colonel is wearing punching mitts as he showed off a few quick punches of his own.

While it is unclear who won the match, both Rathore and Mary Kom are seen exchanging a few punches and some friendly banter during the minute-long clip.

Mary Kom has been training in New Delhi for the upcoming World Boxing Championship. This is the first time in 12 years that the Boxing World Championships are hosted in India. It seemed like Rajyavardhan Singh Rathore faced Kom after he gave his good wishes to the Indian Women’s contingent, before the start of the Championship.

In his tweet, the sports minister said he had a ‘ fabulous time’ training with the Women’s team and is praying for maximum home support for the athletes.

Had a fabulous time with our team training for Women's #WorldBoxingChampionship.

The tournament is taking place in India for the first time since 2006, and our champs are ready! Let's ensure maximum home ground support for our girls! pic.twitter.com/XzbDsUIrOg

The Women's Elite round of the AIBA Women World Championships, New Delhi commences on 15 November 2018.