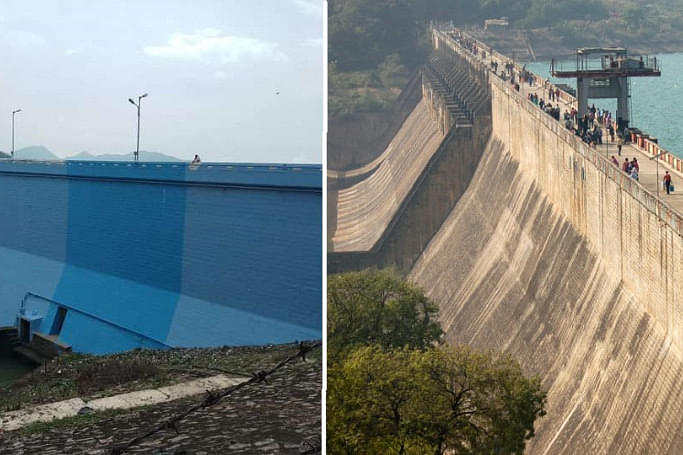 The dam, according to the daily’s report, is maintained by the West Bengal’s Irrigation Department. It was built in the 1950s.

According to News18, Executive Engineer of the Irrigation Department Naresh Prasad Mandal has initiated steps to stop painting of the dam.

However, West Bengal’s Irrigation Minister Somen Mahapatra has defended the move to pain the dam blue and white.

"The West Bengal government built the dam and the state irrigation department maintains it. We have every right to paint the dam in the colours we wish to, nobody can stop us," Mahapatra has been quoted as saying.

"These are handiworks of BJP-hired goons. They wanted the dam to be painted in saffron colour. Is this the way the BJP is planning to saffronise the entire country? We have asked the district magistrate and superintendent of police in Dumka district to take necessary action," he has said.

After BJP’s Youth Wing Bharatiya Janata Yuva Morcha raised objections last week, the work on the dam was stopped by the authorities.

This is not the first time a government building was painted blue and white by the authorities in West Bengal. Just months ago, Banerjee government had issued a dictate asking all state-run and-aided schools to paint the buildings in blue and white. Many such cases have come to light in the past few months.