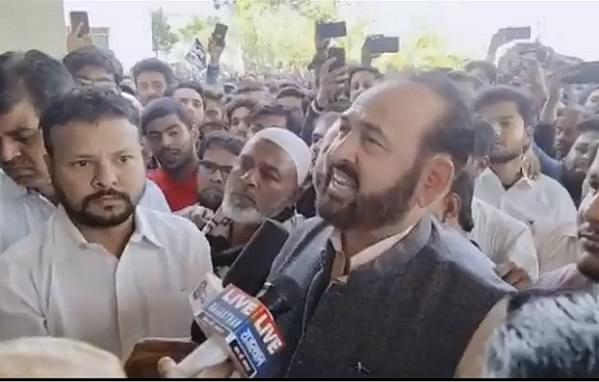 With violent mobs rampaging in various parts of the country against the Citizenship Amendment Bill, a new video has surfaced in which a man can be seen addressing a large crowd and inciting violence by calling for вҖҳkurbaniвҖҷ (sacrifice) and overturning the constitution of India.

The man mentions the population of Muslims in India today is higher and threatens that if all these Muslims rose up the constitution of India would be over-turned.

вҖңModi and Amit Shah, listen with open ears. Clean your ears, and listen carefully to me. They were five lakh in numbers, and we are a population of 25 crore. When this population will give вҖҳQurbaniвҖҷ, it will be such a вҖҳQurbaniвҖҷ that IndiaвҖҷs whole constitution will be reversed that Baba Bhimrao Ambedkar has written. New history will be written.вҖқ

This should be an Eye opener to everyone pic.twitter.com/nkTNV8XUxM

Interestingly, this is not the first time that an appeal based on MuslimвҖҷs demographic power has been made to threaten violence.

Earlier, in a similar show of muscle-power, an anti-CAA student leader was seen addressing an assembled crowd, telling them that if IndiaвҖҷs Musalman wants, he can bring down to halt 500 cities.

The speaker makes comments regarding demography in showing the power of the Muslim community.

The speaker explains to the assembled crowd that the population of the Muslims is higher in urban areas than rural areas, giving the example of Uttar Pradesh where it is 30 per cent, and says that, therefore, Muslims should be able to close down a city.

вҖңIndiaвҖҷs Muslim is urban. He should be able to close down a city. Have some shame. How come a city has not been closed down despite 30 per cent population?вҖқ