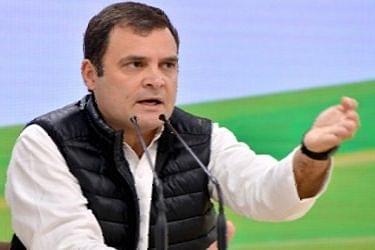 A local family court in Indore has been told by a television actor that he will be paying maintenance to his estranged wife and daughter with the money he gets from the Congress’ proposed minimum income guarantee scheme, Nyuntam Aay Yojana (NYAY), reports India Today.

According to the report, Anand Sharma, who described himself as a struggling actor in television sector, was ordered by the family court on 12 March to pay an interim monthly maintenance amount of Rs 4,500 to his wife and their 12-year-old daughter, who have been living separately for some time now. A dispute between the couple is pending in the court.

Sharma in his petition, that was presented in the family court, said that he performs small roles in TV serials and earns Rs 5,000-6,000 per month. The petition also said that he has to look after his parents too.

He asked the court to put off the 12 March order till the formation of the Congress government (after Lok Sabha polls) as his financial condition does not allow him to make regular payments to his wife.

Sharma gave an undertaking that post formation of the Congress government, Rs 4,500, out of the Rs 6,000 given to him under NYAY, could directly be transferred to his wife’s account.

The family court, according to his lawyer Mohan Patidar, had fixed 29 April as the date for argument on his application.