Win For KCR’s Diplomacy: After Saudi Arabia, UAE Agrees To Setup A Consulate In Hyderabad 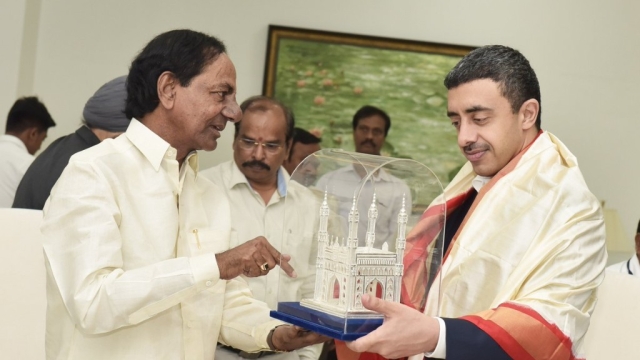 Telangana Chief Minister (CM) K Chandrasekhar Rao on Thursday (28 June) gave his consent for the United Arab Emirate’s proposal for setting up its consulate in Hyderabad, said a statement released by the Telangana CM Office.

As per a statement, Rao has directed Chief Secretary S K Joshi to allocate land and provide infrastructure for the consulate.

This move follows Rao’s meeting with the Minister for Foreign Affairs of the United Arab Emirates, Sheikh Abdullah Bin Zayed Al Nahyan. The latter had called on the CM at his office. The CM was happy with the proposal for establishing a UAE consulate office in the city, and gave consent as this would give a boost to the cordial relationship between Telangana and UAE.

The CM recalled the cultural bonds, historical identity and business relationship between Telangana and the Middle East.

Reportedly, the UAE Minister was all praise for the economic and social growth of Telangana and congratulated Rao for the welfare schemes, including programmes taken up for the development of minorities in the state like establishing residential schools for minorities and irrigation projects. Rao informed the Sheikh on the initiatives in areas such as industrial policy, social aspects, education, infrastructure, etc. and also extended an invitation to the UAE Minister to visit the flagship Kaleshwaram irrigation project.

Hyderabad currently has consulates of USA, UK, Turkey and Iran. The UAE has its consulates in New Delhi and Mumbai, and one in Kerala.

Rao has also been making efforts to get Saudi Arabia to set up its consulate in Hyderabad. In 2016, the Chief Minister requested the Saudi ambassador to India, Dr Soud Mohammed Alsati, to consider the pending proposal to set up a consulate in Hyderabad, citing the reason that nearly three lakh people from Telangana were staying in Saudi Arabia for their livelihood. In 2017 again, Telangana Today reported that the Chief Minister had written a letter to the Prime Minister Narendra Modi, explaining the need for a Saudi consulate for city. He had emphasised the fact that there are good trade relations between Saudi Arabia and Telangana with its IT industry and it is expected to improve further.

The report also mentioned that the “State government feels Hyderabad will a far better option over other states in South India for its cultural links with Saudi Arabia, and as already there are a few other consulates of Muslim countries including Iran and Turkey.”

Saudi Arabia had reportedly agreed to set up a consulate in Hyderabad and broaden its investments in the state.