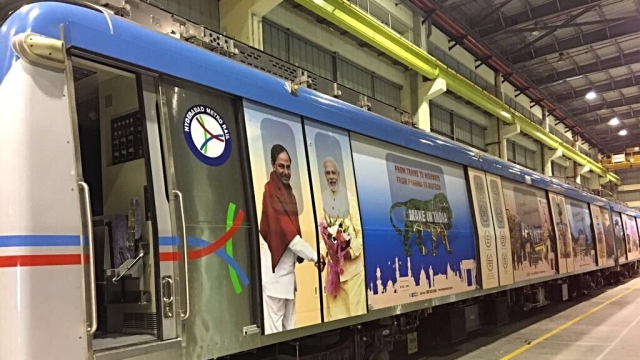 As services start on this stretch, the entire 29 km long Corridor-I of the metro system will become operational. With the addition of this line, the total operational length of the system will go up to 46 km. The sanctioned length of the Hyderabad Metro in phase one is 72 km. There are 24 stations in the operational part of the system that were inaugurated by Prime Minister Narendra Modi in November 2017. The Ameerpet-LB Nagar stretch has 16 stations.

The Corridor-I from Miyapur to LB Nagar will be flagged off by the Governor, ESL Narasimhan, and will take about 52 minutes to cover the distance between Miyapur to LB Nagar, which generally takes about two hours by road. This would assist commuters travelling from Ameerpet to LB Nagar, one of the busiest routes in the city.

The line when operational will make the Hyderabad Metro India’s second-largest metro rail system in the country after Delhi. It is already the world's most prodigious public-private partnership project in the sector.

The Hyderabad Metro expects a footfall of 85,000 every day and around 1 lakh people use it on weekends. When autos and city buses stopped operations in support of the transport bandh on 7 August, the Metro ridership increased to nearly 1.30 lakh a day.

Hyderabad Metro Rail Limited is the first 'transit-oriented development' project that will exploit real estate, and monetise both commercial and office spaces inside and outside the metro stations across the city.

Ameerpet to Hi-Tec city line is reported to be operational from December this year while services between Jubilee Bus Station and Mahatma Gandhi Bus Station(MGBS) will be launched by mid-2019. The L&T Metro Rail (Hyderabad) Limited is developing the project.