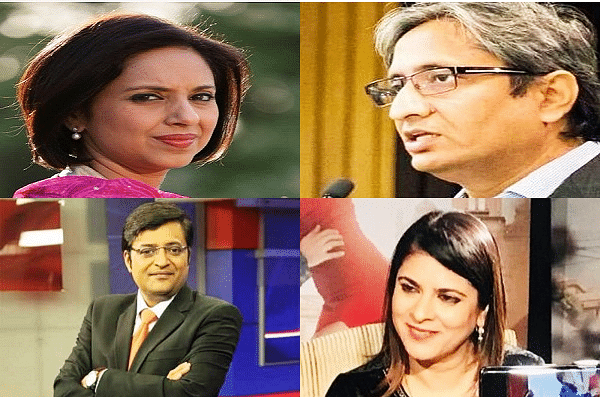 A few of the journalists part of the list

On Friday (29 March) ET Now journalist Supriya Shrinate announced her resignation from the business news channel for contesting the Lok Sabha polls from Uttar Pradesh’s Maharajganj on a Congress ticket.

In light of this development, here is a list of some of the journalists who are closely associated with top politicians and political parties.

Ravish Kumar: TV anchor and journalist associated with NDTV India is the brother of Brajesh Kumar Pandey who is a senior leader of Congress party. He had unsuccessfully contested the Bihar election in 2015.

Brajesh had to tender his resignation from the post of Vice-President of Bihar unit of Congress party after being accused of sexually exploiting a young girl in Patna. He was even charged under the stringent provisions of the Protection of Children from Sexual Offences (POCSO) Act based on a note from the women's cell of the state's Criminal Investigation Department.

Suhasini Haider: Diplomatic Affairs and National Editor of The Hindu is the daughter of senior BJP leader Subramanian Swamy. She is married to Nadeem Haider who is the son of former Indian foreign secretary Salman Haider.

Sonia Singh: The editorial director NDTV is the wife of senior Congress leader and Minister of State for Home Affairs R P N Singh. Singh is known to be a close associate of Congress president Rahul Gandhi. He was an MP from Kushinagar Lok Sabha constituency in 15th Lok Sabha. He however lost in the 2014 Lok Sabha elections.

Singh’s father Kunwar C P N Singh was also a senior Congress leader and elected from Kushinagar seat. He was known to be a fierce loyalist of Indira Gandhi.

Kumar Ketkar: The veteran journalist from Maharashtra has long been accused of towing Congress party’s line during news debates. It thus came as no surprise to his critics when he was nominated to the Rajya Sabha by the Maharashtra unit of Congress party.

Sayed Imtiaz Jaleel: The former NDTV journalist joined Asaduddin Owaisi’s All India Majlis-e-Ittehadul Muslimeen.(AIMIM) in 2014 and was elected as an MLA from the Muslim dominated Aurangabad Central.

Arnab Goswami: The popular news anchor and current Managing Director at Republic TV is the grandson of Rajani Kanta Goswami, a Jana Sangh Leader and his maternal grandfather Gaurisankar Bhattacharyya owed his allegiance to the Communist party.

Arnab ‘s father Manoranjan Goswami was a member of the Bharatiya Janata Party and contested the 1998 Lok Sabha Polls as the BJP candidate for the Guwahati to Lok Sabha of Assam. He was defeated by Congress candidate Bhubaneshwar Kalita.

Tathagata Satpathy: The Lok Sabha MP of BJD from Odisha, is a journalist by profession and an editor of media outlets namely Dhariti and Orissa Post.

Tathagata Satpathy is the younger son of former Odisha Chief Minister Nandini Satpathy. She was from the Congress party.

Nidhi Razdan: The NDTV editor and senior anchor is rumoured to be closely associated with former Jammu and Kashmir Chief Minister Omar Abdullah.

In 2007, Yusuf Ansari wrote a hagiography of Sonia Gandhi titled Triumph of Will. He was member of the department of policy planning and coordination of the All India Congress Committee. Ansari contested 2007 Uttar Pradesh assembly election as Congress candidate.

Neha Seth: Neha Seth, formerly an anchor with CNN-IBN, is the wife of Jitin Prasada, a senior Congress leader and former Minister of state in Manmohan Singh government.

Rai started her career as a journalist with Star News.Later she joined NDTV, where she was an anchor for the Hindi news bulletins. She worked in NDTV till 2009. She later joined Rajya Sabha Television after a short stint with Zee News.

P Sainath: The former Rural Affairs Editor Of The Hindu, is the nephew of former Congress member of parliament V. Shankar Giri and the grandson of V V Giri, ex-President of India and a Congress politician.